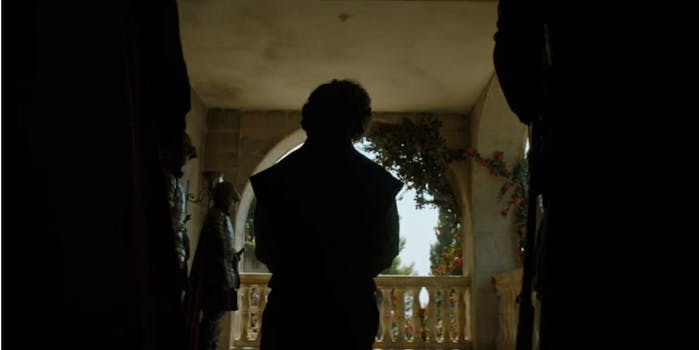 Get your 'Game of Thrones' fix from one of these Westeros die-hards.

Have you ever wondered what would have happened if Ned Stark had survived Littlefinger’s betrayal? How about if Tyrion had fought the Mountain himself—and won? For the thousands of fans anxiously awaiting the next Game of Thrones release, these questions can be answered by the dedicated writers of Game of Thrones fanfiction.

But these 10 picks represent some of the most popular Game of Thrones fanfictions out there. Oh, and because these stories deal with Game of Thrones plots, a massive spoiler alert is officially in effect.

10 of the best Game of Thrones fanfiction

What if, before Joffrey could give the order for his execution, Ned Stark and his daughters fled King’s Landing? In deathwalker’s “Kingdoms at War,” the escape of the Starks changes everything. Robb’s survival, and his subsequent marriage to Margaery Tyrell, gives readers a completely different look at Westerosi politics.

Robb’s fleshed out character reveals himself as an impressive military commander, and the author gives the powerful women in Game of Thrones plenty of time to shine. At 79 chapters and counting, this fanfiction should last you—and the other 399,000 people who’ve started it—at least until sometime next year.

This fanfiction’s title is intriguing enough to get a click from most Game of Thrones fans. Clearly a nod to Jon Snow’s long stint with the Night’s Watch, this 40-chapter-long beast of a fanfiction centers around an alternate timeline from the very beginning.

What if Ned Stark had forbidden Jon to take the black, instead sending him to squire for a knight? The events of Game of Thrones unfurl in a very unfamiliar way through the course of this fanfiction by DolorousEdditor, which has been enjoyed by more than 165,000 people.

All of the characters in Game of Thrones lead rather unfortunate lives. Sansa Stark, in particular, suffered a transformative and painful journey that connected closely with viewers. For those wishing the eldest Stark daughter had endured fewer horrors, consider this absolute monster of a fanfiction.

Clocking in at an impressive 100 chapters, “For Fear Tonight Is All” by Silberias sees Sansa Stark spirited away and wed by Oberon Martell. If only for that fantastic list of tags—but seriously people, don’t Google gout—this fanfiction with upward of 150,000 readers is definitely worth a read.

Another beast from DolorousEdditor, “The Conquest” shifts the story completely. Instead of conquering mainland Westeros, what if Aegon the Conqueror had set his sights on Essos? In a complete twist on Game of Thrones’s historical setting, this 14-chapter fanfiction is a bit more manageable than many others on this list.

Be warned, however: It is not yet completed. As it imagines the survival of many beloved characters who have lost their lives in Game of Thrones canon, it’s not surprising that more than 96,000 people have enjoyed this fanfiction so far.

This popular fanfiction by RemoWilliams twists the timeline in Game of Thrones around one particular event: Tyrion Lannister’s trial by combat. Following Shae’s betrayal at his trial, Tyrion is left without a champion to stand for him against Gregor Clegane.

Using his wit and no small amount of luck, Tyrion defeats The Mountain himself. This earns him the title “The Giant of Casterly Rock” and changes the future of Westeros. With more than 3,000 favorites, this 28 chapter-long fanfiction is sure to scratch that Game of Thrones itch.

This complex fanfiction steers away from altering the events in the Game of Thrones timeline. Instead, The North Remembers—which focuses more on the books than the show—occurs after the events of A Dance with Dragons.

It is intended to serve as a direct sequel to the most recent book in the series and aims to close up dangling storylines. The game of thrones continues in this 113 chapter fanfiction, which has upwards of 1,000 favorites.

Yes, you read that right. Writer cbstevp created an entire trilogy of fanfiction based on Ned Stark surviving the events of the first book. Collected on FanFiction.net, cbstevp’s creation has more than 45 chapters and 1,579 favorites on one site alone.

This series completely flips the events in Game of Thrones by changing the first major death in the series. According to Benjamin Backhaus, who created an impressive collection of novel-length, completed fanfiction, this trilogy is a delightful and fascinating read.

8) “I Became the Daughter and the Son”

This Game of Thrones fanfiction features a major twist on the events established in the series, and it’s a favorite of Ultimate Game of Thrones creator Benjamin Backhaus. In “I Became the Daughter and the Son,” writer GilraenDernhelm takes a deep-dive into a very unexpected relationship between Arya Stark and Jamie Lannister.

For fans looking to turn the series on its head, this 60-chapter fanfiction is worth checking out. The clever writing and careful approach to characters deserve more than the 1,026 favorites garnered so far.

Many fans were left disappointed by the events of Game of Thrones’ final season. Writer rainonmonday created a completely different version of Daenerys Targaryen for Frozen Fire, which has already earned itself more than 3,500 favorites.

Following the loss of Khal Drogo, Daenerys accepts a deal from Eddard Stark, earning herself a safe return to the Seven Kingdoms. Fans yearning for a different take on our favorite Khaleesi will love this 51-chapter story.

Many of these fanfictions begin after a specific event in the Game of Thrones story has been altered. Ruinous Crow‘s Snowfall, which has earned more than 3,000 favorites on FanFiction.net, takes a similar route, but changes the story from the ground up.

What if, following his betrayal at the Wall, Jon Snow were to awaken before the story even begins? Back in Winterfell, with a living Rob and Eddard Stark at his side, Jon could change nearly everything we know about Game of Thrones.

The definitive history of “shipping” in fanfiction on 2 GIRLS 1 PODCAST: