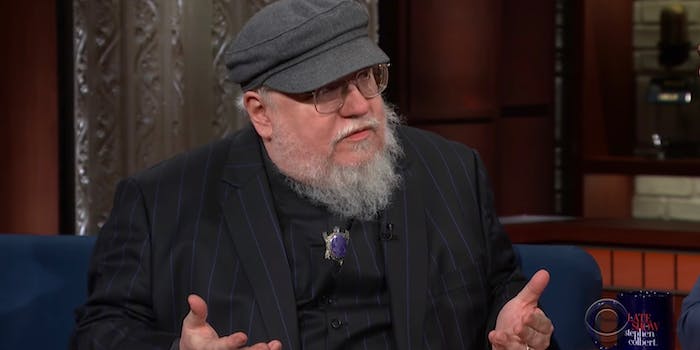 'Winter is not the only thing that is coming.'

George R.R. Martin hasn’t offered many updates on The Winds of Winter—the next book in his Song of Ice and Fire series—during the seven years (and counting) that he has been working on it. But now that he’s fresh off promoting Fire and Blood (a fake history book about the Targaryens), he has some good news for fans who’ve been patiently (and not-so-patiently) waiting for word.

In his latest blog post, Martin reflected on the past few weeks since Fire and Blood came out into the world. He visited the East Coast where he held a release event in New Jersey and appeared on The Late Show. His book became a New York Times bestseller and was on bestsellers’ lists in several other countries. And he was heartened by the response he’s gotten from fans because he wasn’t quite sure how people would react to receiving a 700-page book of fictional history, even one that’s tangentially related to ASOIAF and Game of Thrones.

“I know you want WINDS, and I am going to give it to you… but I am delighted that you stayed with me for this one as well,” Martin wrote. “Your patience and unflagging support means the world to me.”

But Martin goes one step further than acknowledging the book that fans largely want to read. He’s indicated that he’s returned to familiar territory and is back at work on The Winds of Winter while teasing the other Game of Thrones-related material we’ll still have to look forward to.

“I am back in my fortress of solitude, and back in Westeros,” he added. “It won’t be tomorrow, and it won’t be next week, but you will get the end of A SONG OF ICE AND FIRE. Meanwhile, you have the final season of GAME OF THRONES coming, and the new show that is not yet officially called THE LONG NIGHT being cast, and a couple more shows still being scripted… and a few other cool things in the works as well.”

Normally, it wouldn’t necessarily be a big deal that an author is writing the book he’s supposed to be writing. But in recent weeks, as Martin did press for Fire and Blood and Nightflyers (the Syfy series based on his 1980 novella), he had expressed frustration with The Winds of Winter and admitted that he was “struggling with it.” In an interview with the Guardian, Martin called it “not so much a novel as a dozen novels” that each had separate protagonists, antagonists, and a plethora of characters. He found it easier to work on Fire and Blood, a book that took years to work on but in part drew from some of his previously published material.

While Martin had already confirmed and assured fans that his plan was to finish The Winds of Winter following Fire and Blood’s publication, he appears to be more optimistic about what he has to do since doing press in the last month. He marked his mood as “excited” on the post (he often marked his mood on posts when his blog was at LiveJournal) and noted that he was “back in my fortress of solitude, and back in Westeros”—which could possibly be referring to the location he travels to write when, according to the Wall Street Journal, “he wants to hunker down to finish a book.”

We’re no closer to finding out when we’ll get The Winds of Winter, and just because Martin is working on it doesn’t mean we’ll be getting it any time soon. But he’s assured fans that they will get the book and he seems more optimistic about it than he has in a while, which can only be a good thing.