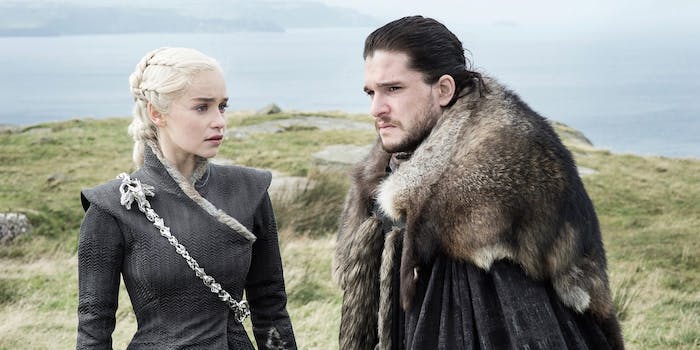 It 'makes the Battle of the Bastards look like a theme park.'

The amount of secrecy surrounding Game of Thrones season 8 has been nothing short of astounding at the height of filming. But with the premiere date far off in the future, we’re finally starting to learn what the end of Game of Thrones will entail.

In a new Entertainment Weekly cover story, the cast and crew begin to open up about ending the world’s most popular TV show along with the lengths they went to to make sure that certain aspects didn’t get out ahead of time. Security was ramped up to the point where Liam Cunningham wasn’t able to read his season 8 scripts before the table read, “drone killer” guns were employed to take down drones attempting to fly over the set, and showrunners David Benioff and D.B. Weiss—who are working on Star Wars after Game of Thrones—even asked The Last Jedi director Rian Johnson and Lucasfilm president Kathleen Kennedy for pointers on how to keep everything under wraps.

It’s also evident just how much being on the show affected the cast. Several have said they cried during the process (Kit Harington admitting the second time was seeing “End of Game of Thrones” on the finale script) while Lena Headey added that “it’s a huge sense of loss, like we’ll never have anything like this again.”

Our first look involves a bit of fashion, which manages to carry secret meaning. Daenerys Targaryen’s new coat is very similar in appearance to the stunner she debuted in “Beyond the Wall,” but the stripes are now black and red (likely to symbolize Drogon), which stand out even more against the white fur.

The first official photo from #GameOfThrones’ final season is here! Get exclusive details on the most impossible finale in TV history in our report from the #GoT set: https://t.co/wjWGa4K2Yr pic.twitter.com/59aFZkCR0U

Given the anticipation over Game of Thrones, the details revealed about season 8 are on a smaller scale but will entice any fan looking for any kind of information on season 8. But if you’re trying to avoid learning anything ahead of time, turn away now.

Our first look at the season 8 premiere

The end of season 7 set many of our favorite characters a clear path: toward Winterfell. Jaime is on a lone horse after he abandoned Cersei Lannister; Sansa and Arya Stark just secured Winterfell back after executing Littlefinger for betraying them; Jon Snow and Daenerys Targaryen, having committed accidental incest, are sailing to White Harbor; and Bran Stark and Samwell Tarly are waiting to drop a couple of major bombshells on Jon once he arrives.

According to Entertainment Weekly, the season will be largely shaped by how the characters we’ve grown to love will react to one another. The season premiere, in particular, will feature homages to the pilot (in which Robert Baratheon’s party arrived at Winterfell), but everything has changed. There’s a new ruler in town, most of the major characters who met King Robert Baratheon are now dead, and Sansa’s not exactly pleased with Jon after he pledged the North to Daenerys.

And this is even before Sansa learns what Bran has to tell Jon.

“It’s about all of these disparate characters coming together to face a common enemy, dealing with their own past, and defining the person they want to be in the face of certain death,” writer and co-executive producer Bryan Cogman explained. “It’s an incredibly emotional, haunting, bittersweet final season, and I think it honors very much what George set out to do—which is flipping this kind of story on its head.”

Although not everything will be pleasant in Winterfell, we’re also hoping for some heartfelt reunions on the horizon such as the ones between Jon and Arya, which we’ve been waiting to see since the show’s second episode.

There have been plenty of set reports about a major battle that will take place in season 8 thanks to much of it taking place outdoors. A post from assistant director Jonathan Quinlan revealed that an upcoming battle took 11 weeks to film and included 55 days of night shoots in a row.

The cover story clarifies the scope of the battle, which will take place at an expanded Winterfell and will include scenes outdoors and inside of Winterfell, after some of the information about the shoot was misreported. It’s the largest battle Game of Thrones has ever shot and will be helmed by director Miguel Sipochnik, who previously directed “Battle of the Bastards” and “Hardhome.” The challenge for the crew was to make the story “compelling” enough.

“It’s brutal,” Peter Dinklage said. “It makes the Battle of the Bastards look like a theme park.”

The end was out of reach for years

Benioff and Weiss had known for some time how George R.R. Martin’s A Song of Ice and Fire series would end but worried about how they would be able to afford shooting it even with HBO’s budget. At one point, they proposed turning the final season into movies, but HBO said no.

That was back in season 3. Since then, the show blew up so much—and in the process, become a cash cow for HBO—that HBO was easily able to make larger budgets happen; the final season has a budget of more than $15 million an episode. But in plotting how Game of Thrones ends, it also meant convincing HBO to say goodbye to its most popular TV show.

“We want to stop where we—the people working on it, and the people watching it—both wish it went a little bit longer,” Benioff explained. “There’s the old adage of ‘Always leave them wanting more,’ but also things start to fall apart when you stop wanting to be there. You don’t want to fuck it up.”

You can read Entertainment Weekly’s cover story in full here.