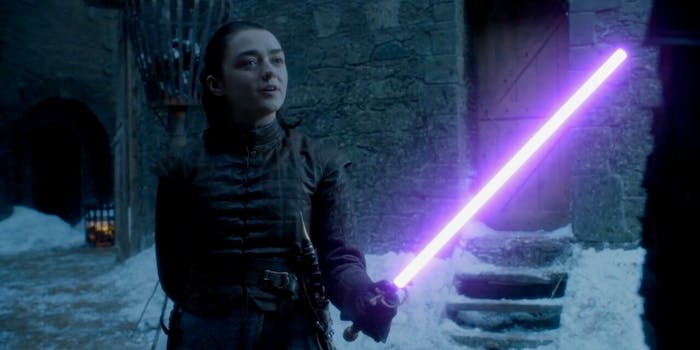 Fewer limbs were lost than your average lightsaber battle.

Arya Stark and Brienne of Tarth sparring at Winterfell on Game of Thrones is the fight we didn’t know we needed, but one fan found one thing to make it even better.

YouTube user Omid G—who previously worked some magic on last season’s Battle of the Bastards—has now added lightsabers to their swordplay, bringing a Jedi-like quality in a matchup between one of the finest fighters in Westeros and someone who’s trained with a First Sword of Braavos, the Hound, and the Faceless Men. Even Brienne’s padawan, Podrick Payne, has a lightsaber at his side while he watches the two women face off.

We’ve seen just about every Game of Thrones sword fight you can recall remixed with lightsabers from the Tower of Joy to Oberyn Martell vs. the Mountain and even Ned Stark vs. Jaime Lannister in season 1. But this one is special. When Arya left Brienne in season 4, she was the learner. And now that she’s home again, she is the master.