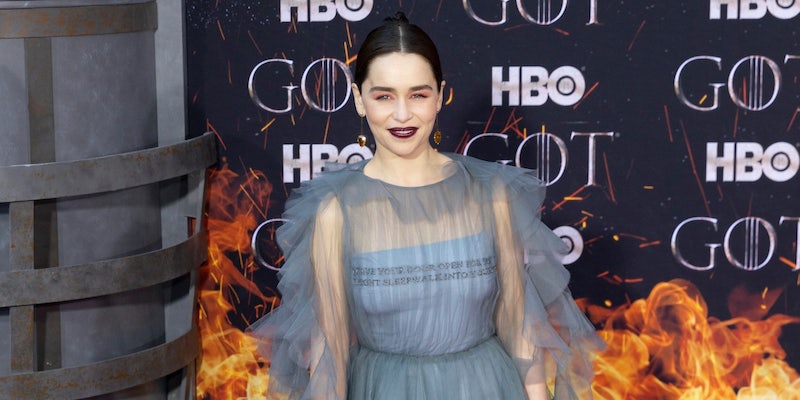 Emilia Clarke showed her appreciation this week for a Game of Thrones subreddit after members helped raise more than £105,000 (approximately $133,000) and counting for a charity close to her heart.

SameYou, which aims to help young adults rehabilitate as they recover from a brain injury, posted a video of Clarke lip-syncing to Tina Turner’s “Simply the Best.” The caption thanks both r/freefolk, a spoiler-friendly Game of Thrones subreddit, and redditor elle_ellaria, the person who started the fundraising efforts on JustGiving.

The fundraising campaign for Same You—and the latest goal that it reached—is weeks in the making. elle_ellaria launched the campaign on May 22, just three days after the end of Game of Thrones, as a way to show her own appreciation for the Game of Thrones cast—particularly the performance that Clarke gave as Daenerys Targaryen for the past eight seasons. She went with SameYou, the charity that Clarke founded after revealing in an essay for the New Yorker that she had two aneurysms while making Game of Thrones.

The campaign came out of r/freefolk, which was also behind the now-infamous “remake Game of Thrones season 8 petition,” although elle_ellaria stresses that the fundraising campaign is not a counter-petition or an apology to the season 8 petition. It was a way to let the cast know how grateful they were for their performances and that the frustration they might have with how Game of Thrones ended (especially Dany’s story) had nothing to do with the actors’ performances.

This fundraiser began in r/freefolk, the same subreddit the now-infamous petition originated from. Since the tongue-in-cheek nature of that petition has flown over a lot of peoples’ heads, to the point that it’s prompted backlash from some of the cast, we wanted to show that Game of Thrones fans appreciate the hard work of the incredible cast & crew despite their constraints. Any disappointment we felt with the conclusion of the series was not in them, but rather in the potential that was lost due to the rushed pace of storytelling.

And so, as a gesture of love and support from the fandom to the entire cast & crew – but also particularly to the woman who poured her very soul into her character, who delivered passionate speeches in High Valyrian and Dothraki in between questioning her very mortality, and inspired so many of us with her resilience –  I am setting up this page as a public support of her charity, SameYou.

elle_ellaria’s fundraiser went viral, and in the wake of its success, redditor AlpineJ0e, another member of r/freefolk, started a similar fundraising campaign on JustGiving for Mencap as a way to show their appreciation for Kit Harington and give to a charity he supports.

Last week, Clarke also thanked elle_ellaria and the fundraising efforts in a video posted to Instagram, where she found herself at a loss for words.

“It’s extraordinary what you guys have done,” Clarke said. “You’ve given me a wrap gift, this is what this is.”

Ok so ‘speechless’ is a very fluid term…. that I’ve ignored in this rambling video BUT how could I be when there are so many thank you’s to give to YOU AMAZING HUMAN BEANS!!!!! Bloody hell, I am one very lucky lady to have such kind, generous, shining spirited fans who are raising money for my chairty @sameyouorg Elle Elaria and your reddit page where you have raised almost £38,000 has made my day, week, month, year, decade, and I couldn’t think of a more beautiful way to wave goodbye to the mother of dragons than with this step towards making brain injury sufferers feel less alone. YOU ARE MY HEROS. I am the one who should be bending the knee to you. #loveinabundance #sameyoucharity #humanitywins #thisiswhatbraininjurylookslike #❤️

A pinned r/freefolk post now also directs fans to charities supported by other members of the cast so that fans can donate to those as well. r/freefolk is now trying to get HBO to match its fundraising efforts.