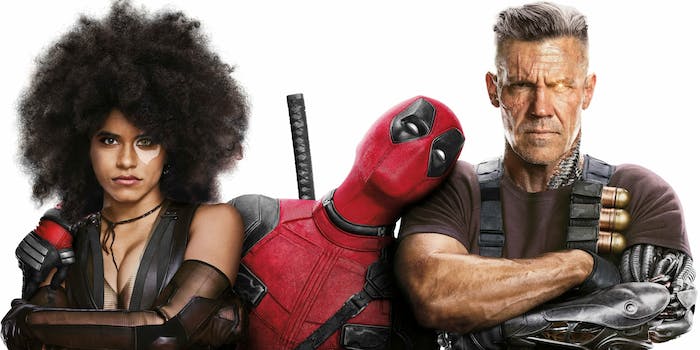 All those pop-culture references and dick jokes can get pretty tiring.

This Deadpool 2 review is spoiler-free.

Deadpool is Minions for nerds. Ubiquitous, meme-able, and thoroughly tiresome for anyone who doesn’t find him hilarious. So at the risk of being trite: If you liked the first movie, you’ll probably enjoy this one. If you didn’t, you won’t.

Throughout Deadpool 2, I kept thinking back to Thor: Ragnarok and its director Taika Waititi. That’s partly due to the presence of Julian Dennison, the star of Waititi’s 2016 comedy Hunt of the Wilderpeople, which cast him in a similar role. In Wilderpeople, he’s a sulky teen orphan who wants to be a gangster and finds an unlikely father-figure in grumpy farmer Sam Neill. In Deadpool 2, he’s a sulky teen mutant who wants to be a gangster and finds an unlikely father figure in Deadpool. Dennison is great in both. But for me, the Waititi connection highlighted how much better Ragnarok was at what Deadpool 2 tries to do. Ragnarok was subversive, genre-savvy, and exercised a wealth of comedic expertise from slapstick to political satire. Deadpool 2 is more like being trapped in a car with a 13-year-old who communicates in Monty Python quotes and subscribes to CinemaSins on YouTube.

Both Deadpool movies are relentlessly dialogue-driven, with jokes mostly falling into two categories: enthusiastic one-liners about dicks and butts, and Big Bang Theory-style pop culture references. (One of their favorite techniques is contrasting extreme violence with traditionally feminine and/or gay music icons, resulting in a Celine Dion credits sequence, a Dolly Parton action scene, a recurring Barbra Streisand joke, and Flashdance posters.) From a distance, I understand the appeal. The Deadpool franchise takes teen boy humor and repackages it for people who aren’t teenage boys. The fanbase is pretty diverse, reflected by Deadpool 2′s ensemble cast and its balance of being puerile but not too offensive. When the characters joke about taboo topics like race and pedophilia, they generally don’t take aim at vulnerable people. It’s like a woke South Park, if you can imagine such a thing. Or, to make a less flattering comparison, it’s like It’s Always Sunny In Philadelphia, but nowhere near as good.

In Deadpool 2′s favor, it actually breaks a long-awaited record. It’s the first mainstream superhero movie to feature openly queer characters, giving Negasonic Teenage Warhead a girlfriend, Yukio. Brianna Hildebrand (Negasonic) is just as delightful as she was in the first movie, making me yearn for a team spinoff with considerably less Deadpool screentime. The supporting cast is ultimately more appealing than the lead, introducing a collection of absurd new C-list mutants. Then there’s Josh Brolin as the time-traveling cyborg Cable, Deadpool’s partner in the comics.

Cable spends much of the film as an antagonist, positioned as the straight man to Deadpool’s hyperactive antics. He’s gruff. He’s butch. He has a laser eye and a big scary gun and growls things like “Dubstep is for pussies.” He’s an overblown parody of angsty supersoldier stereotypes, and he’s a lot more engaging than Brolin’s overhyped Thanos in Avengers: Infinity War.

Underneath all the one-liners and cartoonish gore, Deadpool 2 is a very basic superhero movie. The plot is as simple as its predecessor, following genre formulas as much as it parodies them. The first act relies on such a widely criticized cliché that I was amazed they didn’t have Deadpool break the fourth wall and point it out. After that, he assembles a team to save the young Firefist (Julian Dennison) from Cable, leading into a string of high-octane action sequences. (John Wick‘s David Leitch replaced original Deadpool director Tim Miller, and while Deadpool 2 isn’t on the same level as Wick, the fight choreography is refreshingly imaginative.) This provides the basis for a potential X-Force franchise with Cable leading the squad.

Out of the new team, the biggest breakout star is Domino (Zazie Beetz). Her superpower is “luck,” illustrated with an action scene to rival Quicksilver in X-Men: Days of Future Past. Honestly? She rules. She’s just super fun to watch, and in a film like this, that’s really all you need. She doesn’t get much more screentime than Colossus (Stefan Kapičić) or Deadpool’s fiancee Vanessa (Morena Baccarin), but she’s clearly the most memorable character alongside the already-popular Cable.

When blockbuster filmmakers release a real stinker, they often repeat the same refrain: “It’s for the fans, not the critics.” Deadpool 2 isn’t exactly a stinker, but it is for the fans. It doesn’t add much to the superhero genre besides R-rated violence and dick jokes, and it certainly doesn’t hide any deeper themes. At times, the fourth-wall-breaking jokes almost seem like they were chosen by a focus group for maximum geek recognition. The whole thing plays to a post-millennial Kevin Smith audience, and in the words of Negasonic Teenage Warhead, it’s X-hausting. But if that’s what you came here to see, it delivers everything it promised. Deadpool is Deadpool is Deadpool, and apparently, that’s how people like it.