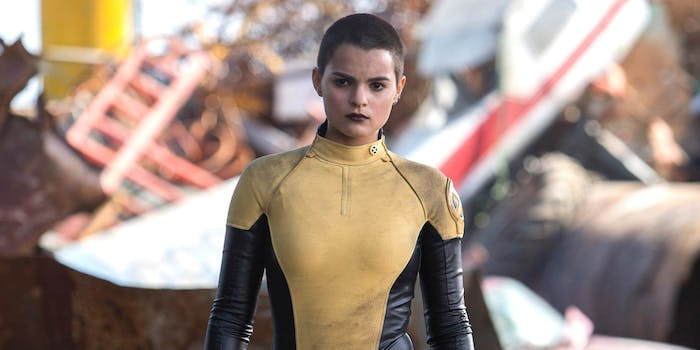 A quick guide to Negasonic Teenage Warhead, the real star of ‘Deadpool’

Deadpool is a welcome addition to 2016’s overstuffed schedule of comic-book movies. It’s weird, it’s adult-rated, and Ryan Reynolds has really committed to his role as Hollywood’s grossest antihero.

Most importantly, Deadpool introduces the most beautifully named character in superhero-movie history.

Actress Brianna Hildebrand was a total role-model in Deadpool‘s red-band trailer, doing what every teen does best: playing with her phone while adults tried to make her do something serious (in this case, battling a supervillain). In the words of Deadpool director Tim Miller: “Her whole attitude is this disaffected teen who thinks Deadpool’s just a douchebag.” Basically, she’s a cross between Lisbeth Salander and Hit-Girl from Kick-Ass, and we can think of several superheroes who would benefit from her taking them down a peg.

As for Negasonic Teenage Warhead’s background in Marvel Comics, she’s pretty obscure—even by the standards of X-Men canon and its cast of thousands. Her most significant role was predicting a devastating attack on Genosha, the all-mutant nation ruled by Magneto. She died in the attack, and while she does appear in a couple of later comics, it’s either as one of Emma Frost‘s illusions or as a resurrected mutant zombie. (There’s nothing more goth than being dead, after all.)

That backstory gives you a sense of how thoroughly the character was rewritten for her movie debut, because she clearly has a different set of powers in the Deadpool trailer. Instead of being a telepath with precognitive abilities, she can channel explosive energy through her body. She’s also introduced as Colossus’s protege, leaving things open for her to cross over into the X-Men movies. (We hope.)

From the sound of it, Deadpool‘s creative team picked her because she had a cool name and then just made up a new character, which honestly seems like as good a reason as any.

Negasonic Teenage Warhead (named by Grant Morrison after a song by the band Monster Magnet) is frequently cited as one of the worst names in superhero comics, but we couldn’t disagree more. It’s finally time for her to shine. With angry goth flames.