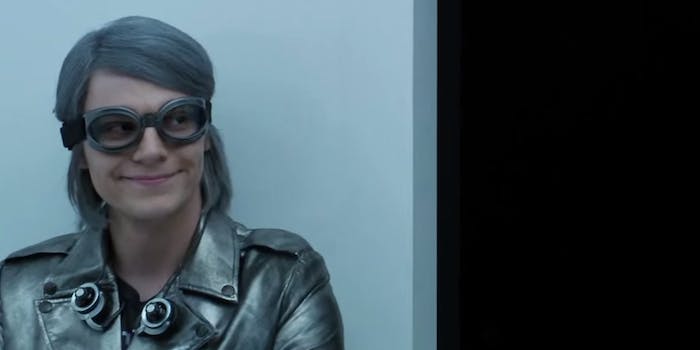 Has ‘X-Men’ already won the battle of the Quicksilvers?

Evan Peters' fun approach to the character raises the stakes for Marvel.

Anyone who saw X-Men: Days of Future Past will already have freaked out about the Quicksilver scene. Forget epic battle sequences: Watching Quicksilver zip around a bunch of prison guards while listening to Jim Croce is just plain fun.

The good news is that Days of Future Past had a good explanation for this ridiculous-looking costume: Quicksilver is a teen dweeb who dresses like that because he genuinely thinks it looks cool. As a guy who is always slightly ahead of the game, his fashion sense is more 1980s punk than the other characters. His shoes and jacket were almost certainly spraypainted silver in his mom’s garage. (The goggles, by the way, seem to be ordinary swimming goggles that he wears to protect his eyes when he’s running at super-speed.)

Aside from the costume issue, the other concern was that X-Men isn’t the only major superhero franchise with Quicksilver in it. Avengers: Age of Ultron will include Quicksilver as well, although just to be clear, this is not a crossover. These are two separate versions of the character, played by different actors and existing in different universes. Because superhero movies aren’t complicated enough already.

evan peters vs aaron taylor-johnson as quicksilver, who does it better? pic.twitter.com/maRQRStXUC

Anyway, because the Avengers franchise has a ridiculously good track record with casting perfect actors for each role, most Marvel fans assumed that Evan Peters’ silver-haired dork Quicksilver would be kind of embarrassing, while Aaron Taylor-Johnson would be the “good” version. Of course, this was before Days of Future Past came out, and before Aaron Taylor-Johnson was proclaimed to be the dullest thing in Godzilla.

Quicksilver is amazing in Days of Future Past. Can’t wait to see how the always dull Aaron Taylor-Johnson muddles the role in Avengers 2.

The awesomeness of Quicksilver in #Xmen bums me out since Aaron Taylor-Johnson’s version in Avengers 2 will likely be a boring meat block.

Luckily for Aaron Taylor-Johnson, the Avengers version of Quicksilver will be pretty different from the X-Men version, no matter what. For one thing, while the Marvel comics universe is pretty fluid, Marvel Studios movies can’t include mutants because Fox owns the rights to the X-Men comics. Hence why Wolverine won’t be appearing in an Avengers movie anytime soon, no matter what Hugh Jackman might be saying.

The complex nature of Marvel comics canon means that while Quicksilver is Magneto’s son in some comics, in others he’s just some dude who can run very fast. As Andrew Wheeler points out over at Comics Alliance, Quicksilver has been a crossover character between the X-Men and Avengers comics for a long time.

Inevitably, comparisons will be made between the two new incarnations of the character. Avengers: Age of Ultron has already filmed many of Aaron Taylor-Johnson’s scenes, so it’s unlikely that they’ll be able to change much in response to the new X-Men movie. The biggest problem for Avengers is that their Quicksilver is likely to be a lot less fun than Evan Peters. X-Men’s Quicksilver is a wisecracking teen, while in the MCU, we already know that Quicksilver and his sister Scarlet Witch have been imprisoned and experimented on by HYDRA. Not exactly conducive to off-the-cuff charm.

The first trailer for Avengers: Age of Ultron won’t be revealed for a few months, but it’ll be interesting to see how Marvel Studios decides to market Quicksilver. Taylor-Johnson received negative reviews for Godzilla (the word “boring” was a popular choice), and Evan Peters’ success in X-Men may have put a dampener on plans to hype up Quicksilver during the Avengers publicity campaign. Who knows, maybe they’ll decide to focus on Scarlet Witch instead.