10 things you need to know about Cable, Deadpool’s time-traveling partner

The time-traveling mutant has been a fan favorite for decades.

When Ryan Reynold’s Deadpool announced that Cable would be in Deadpool 2 in the post-credits scene for the first film, it created a jovial frenzy among X-Men fans. The time-traveling mutant has been a fan favorite for decades.

Created in part by Deadpool creator Rob Liefeld, Cable is a grizzly, mutant cyborg who is the antithesis of Deadpool’s over-the-top wit and sardonic charm.

Cable has had a storied past in the pantheon of X-Men comics. For hardcore fans, he’s a loved staple of an already complex assemblage of characters. For those who aren’t familiar with him, he can be a bit of a mystery. His intricate backstory might not make the most sense for the average bystander.

Deciphering Cable’s origins might be like taking a journey through a labyrinth of interwoven narratives. But with Josh Brolin playing the famed mutant in next year’s Deadpool 2, it’s worth the effort.

1. Cable is the offspring of Cyclops and Jean Grey’s clone

Cable, also known as Nathan Summers, is the biological son of X-Men leader Cyclops (Scott Summers) and Madelyne Pryor, Jean Grey’s clone. The exact origins of Scott Summers and Pryor’s relationship remain convoluted at best. Pryor’s origins have been retconned many times in the comics, making it difficult to ascertain what beginnings have the most merit in the long history of stories featuring Pryor.

In the most succinct summation of their courtship, Cyclops and Pryor became romantically involved. Pryor gave birth to Cable, who they raised for 12 years. At some point, Pryor realized she was the clone of Jean Grey. Outside forces would manipulate her to become a supervillain, further complicating her relationship with Cyclops and Cable. Even though Cable’s parents are quite famous in the X-Men lexicon, Cable has rarely interacted with them. He’s often paired with Deadpool or leads other groups of mutants not commonly affiliated with Cyclops or the regular members of the X-Men.

2. Cable is from a possible future

One of the most confusing aspects about Cable’s backstory may be the fact that he’s actually from the future. Well, a possible future anyway.

Cable was sent to the future as a child for protection. The villainous Mr. Sinister had hoped to use the young child as a weapon against Apocalypse but was unable to do so. Once Apocalypse learned of this plan, he abducted young Nathan as a kid and injected him with the Techno-Organic Virus, which translates organic tissue to cybernetic metal.

Nathan was nearly consumed by the virus until he was captured from Apocalypse’s clutches.

The mutant Askani, who would later join the team known as X-Force formed by Cable, saved Nathan before Apocalypse was able to inflict any more damage on the young, scared child.

Askani was the one that warned Cyclops that the only way to completely save Cable from the dangerous, flesh-destroying virus would be to sent him 2,000 years into the future. Cyclops has no choice but to agree to this plan, and Askani travels with Cable into the future, effectively raising him until he is an adolescent.

3. Cable is a telepath

For those unfamiliar with Cable, it might be confusing to understand what kind of powers Cable possesses. One of Cable’s most notable powers is that he is a telepath, a power that in the past hasn’t been touched upon a good deal.

In the comics, Cable works very hard to suppress his telepathic abilities. That’s because Cable has to constantly fight against the Techno-Organic Virus, which is constantly trying to consume his organic components. In recent iterations of Cable, there hasn’t been as much a focus on Cable’s telepathy.

Cable wasn’t born a telepath, though. Cable’s psionic abilities didn’t come into focus until after he had been sent to the future.

4. Cable has an evil clone

Cable has a clone, and he wasn’t always intended for evil. After Askani traveled with Cable to the future, Mother Askani (a member of the Askani clan) decided to clone young Nathan in case he died from complications of the Techno-Organic Virus.

The clone ages rapidly, however, quickly accelerating until he is the same age as Nathan himself. Mother Askani is able to halt the virus in Nathan’s body, saving him from death. When Apocalypse attacks the Askani hiding place, he kidnaps the clone thinking it is actually Nathan.

Apocalypse ends up raising the child as “Stryfe”, basically an evil clone version of Cable. Stryfe would end up causing a lot of mayhem for the X-Men, and Cable takes it upon himself in the comics to destroy Stryfe, feeling responsible for the mutant’s existence.

5. Cable had his own comic-book series with Deadpool

Comic book writer Rob Liefeld is one of the most famous writers in the industry. He’s credited with creating both Deadpool and Cable, though other writers would end up fleshing out both characters. It makes sense then that both have shared their own comic-book series.

Created in 2004, Cable & Deadpool has been a huge success, garnering many issues and revamps, as well as a standalone Cable series. They’re an odd pairing but it works: Cable’s irate, no-nonsense demeanor compliments Deadpool’s witty and sarcastic surprisingly well. 6. Cable was created to stop Apocalypse

You might remember the Ivan Ooze-esque villain from last summer’s tepidly received X-Men: Apocalypse, where Apocalypse was the titular bad guy. In that film, Oscar Isaacs was barely distinguishable playing him underneath mountains of purple make-up. Don’t expect Oscar Isaac’s Apocalypse to cross paths with Josh Brolin’s Cable, though. Apocalypse is not scheduled to appear in Deadpool 2.

In the comics, Apocalypse is actually the sole reason Cable was created. Mr. Sinister orchestrated Cable’s birth in an effort to create a mutant capable enough to destroy the egotistical megalomaniac. The plan was thwarted when Apocalypse learned of this plan, thus forcing Cyclops to send Cable into the future for his protection. 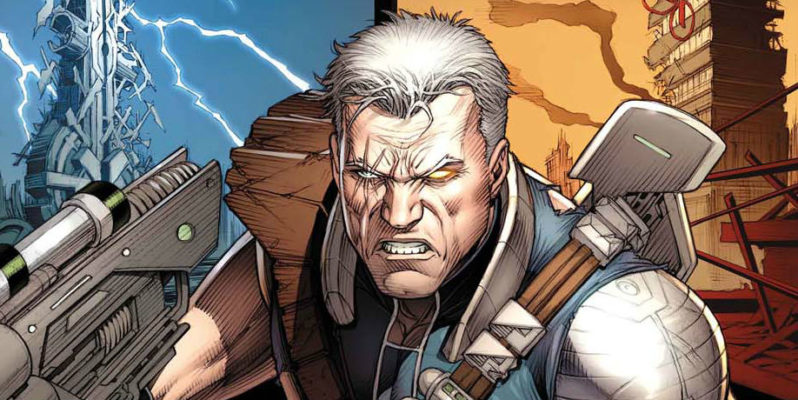 7. Cable’s powers allow him to pass for a human

As a result of being inflicted with the deadly Techno-Organic Virus, Cable’s powers have fluctuated from time to time. He already suppresses his psionic abilities to keep the virus at bay, and doing so forces him to suppress other aspects of his mutant powers—to the point where he can occasionally pass for a human.

In more recent comics, Cable was stripped of his powers when Scarlet Witch reshaped reality. That caused Cable to temporarily accelerate in his aging. It all but nearly killed him until Deadpool helped him regain his powers by aiding him with a cure. When his powers returned, he also lost the years he gained as a powerless homo sapien. The New Mutants are a group of mutant fighters, not too dissimilar to the X-Men, who joined forces to stop Stryfe, Cable’s clone. Cable felt guilty that these ragtag group of mutants—who are getting their own movie spin-off next year and who currently count Domino among their ranks—had to deal with an enemy that came about in part because of him.

As a result, Cable reorganized the New Mutants into the X-Force to help defeat Stryfe. It became a popular comic-book series of its own. It was actually the X-Force comics that further developed Cable’s backstory for the first time. 9. Cable was a member of the Avengers

When you think of the Avengers, you probably think of Iron Man, Captain America, or Thor. Even characters such as Spider-Man and Wolverine have been Avengers in the past. However, you may not have realized that Cable himself has been on the Avengers. He’s even led the Avengers in battle against the X-Men, in a popular comic series called Avengers vs. X-Men, which debuted in April 2012.

Cable was not a popular member of the team, often butting heads with Captain America, Falcon, and Iron Man. He even fought several members of the Avengers in battle, and actually beat several of them. It wasn’t until the “Red Hulk,” or Thunderbolt Ross, attacked Cable by surprise that he was actually subdued.

Cable was not an active member of the Avengers for long, though. So don’t expect him to pop up in any of the forthcoming Avengers: Infinity War films.

Cable is not a typical villain in the traditional sense in the X-Men universe. However, he’s not necessarily a “good guy,” either. That’s why when Professor Xavier was injected with the Techno-Organic Virus, the X-Men assumed it was Cable who infected him.

The X-Men went after Cable, thinking he was the culprit. It took Wolverine entangling him in a round of fisticuffs for Cable to explain that he wasn’t the one behind Xavier’s infection. It was, of course, Cable’s clone Stryfe who had infected Xavier, framing Cable for the treacherous act.