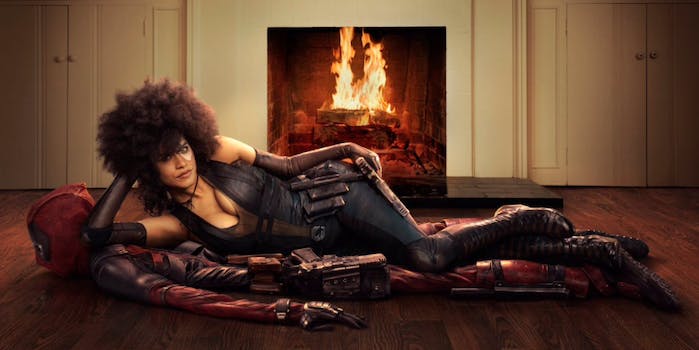 The deadly mercenary will have a major role in 'Deadpool 2.'

The Marvel Universe is not without its considerable supply of strong women. There’s Black Widow, Gamora, and Elektra to name a few. You might not be familiar with Domino, a skilled and deadly mercenary, but you will soon. She appears alongside Josh Brolin’s Cable in next year’s Deadpool 2.

Domino has a had a long history with the X-Men. She’s butted heads with Wolverine, and eventually did more than just butt heads with the feral mutant. She also has had a very close relationship with the mutant Cable. Domino might not appear like a menacing threat at first glance, but her looks are deceiving: Domino is one of the deadliest mutants that’s ever come across the X-Men.

With her appearance in Deadpool 2 next year, here are a few things you should know about one of the founding members of the X-Force.

1. Domino first appeared as a shape-shifter

When “Domino” appeared in New Mutants volume 1 in February 1991, it was as Copycat, an infamously nasty shape-shifter in X-Men lore. Copycat assumed Domino’s personality for a long duration in the comics, unbeknownst to readers at the time.

2. The real Domino didn’t appear for over a year

The real Domino didn’t appear until over a year later. When Domino finally appeared in volume 8 of X-Force, it wasn’t even in the narrative proper. It was in a flashback that was described by Cable. She wasn’t fleshed out until later issues of X-Force and wasn’t given a significant role until the spin-off series Cable & Deadpool where Wolverine was leading the X-Force.

Copycat would continue to pose a threat to Domino, becoming a longstanding nemesis of the famed mercenary and X-Force member.

3. Domino is one of the longest running members of X-Force

Domino may have made her first appearance in New Mutants, but she didn’t come into her own until the X-Force series. She was a founding member of the team alongside her partner in crime, Cable. When X-Force received a revamp in 2014, Domino still had a starring role.

Domino continued to act as a member of the X-Force even after Cable left the team to join Deadpool. That brought her into conflict with the then-leader of the team, Wolverine.

When Wolverine reformed the X-Force, he turned it into a violent task force that hunted down mutant adversaries and political enemies.

That temporarily brought Wolverine into conflict Domino, who had her own ideas about how the X-Force should operate. At first, it was a very contentious relationship. Domino and Wolverine are both strong-willed characters, and neither of them backed down. However, that bubbly tension eventually turned into romantic lust.

For several issues, Wolverine and Domino unofficially dated, but even then, Domino challenged Wolverine’s leadership.

Domino has always been close with Cable, but the two didn’t originally start off as partners.

As a mercenary, Domino was a member of S.H.I.E.L.D. She worked with several other mercenaries, including Six Pack, Bridge, Hammer, and Anaconda. One of her first assignments was to take down Cable, and it as you might expect, it did not go well. She attacked him at his home base called Providence, but after a vicious and debilitating battle, Domino ultimately defected and joined Cable’s side.

Domino later left S.H.I.E.L.D. and abandoned her fellow mercenaries, causing a lot of conflict with her trusted allies. Domino and Cable Photo via Marvel shared a deep, personal, and intimate connection that bled deeper than any code of honor, however. After that initial conflict, Domino and Cable Photo via Marvel became partners that were fiercely loyal to each other.

6. Domino had to kill one of her only friends

One of the defining and most tragic moments in Domino’s life began with a tip about a violent serial killer in Colorado. After doing some investigative work, Domino is convinced the person behind the murders is her close friend and former teammate Grizzly.

When she tracks him down, she discovers that he is being manipulated and controlled by Genesis, Cable’s son. In order to free himself, Grizzly begs Domino to shoot him. In one of the most heartbreaking moments in Domino’s history, she has to look into the eyes of her closest friend and pull the trigger. She ends up burying him in the woods of Colorado, an act that stays with Domino for a very long time in the comics.

Domino will do anything for her friends, and that unwavering loyalty is what separates her from other mercenaries. It also, unfortunately, brings her immense amounts of pain. This act would later define Domino, and it’s an integral part of her character.

7. Domino had a role during the Marvel ‘Civil War’

Even though Domino didn’t appear in Captain America: Civil War, she still had an active role in the Marvel comic of the same year.

As a member of X-Force, Domino attacked Xavier’s Institute alongside Caliban (who appeared in 2017’s Logan) and Shatterstar. The attack, which was an act to free 198 mutant refugees that Xavier was giving shelter, caused Domino to come into conflict with Cable.

Cable ended up taking the side of Xavier and defending him and his students. This led to an intense, sprawling battle between the X-Force and their former leader. Cable was presumed dead after the assault, but he survived, and the incident forged a rift between the two former partners.

8. Domino worked for Apocalypse in an alternate reality

In the famed Age of Apocalypse story (which was the basis for last year’s X-Men: Apocalypse), Domino was a barbarous bounty hunter working for Apocalypse. She would recruit Grizzly and Caliban to Apocalypse’s crusade. In the actual timeline, Grizzly was one of Domino’s close friends, and Caliban was a member of the X-Force under Domino’s leadership.

In the series, Domino was instructed to target Nathaniel Grey, who in this universe was the offspring of Scott Summers and Jean Grey. Grey is an alternate version of Cable, meaning even in an alternate reality Domino and Cable still crossed paths. Apocalypse imbued Domino with incredible powers in order to track down and hunt Grey.

9. Domino was killed in that alternative reality

Even with those powers, Domino was no match for Grey.

Grey tapped into his psionic abilities and killed Domino by corrupting her mind, exposing her consciousness to all of the suffering she had caused. It was a savage end to a vicious interpretation of Domino.

10. The real Domino is still kicking

Domino still crosses paths with Cable and Deadpool, and next year she’ll come to cinematic life in the form of actress Zazie Beetz in Deadpool 2. You can bet she’ll make life a living hell for the notorious Merc with a Mouth.