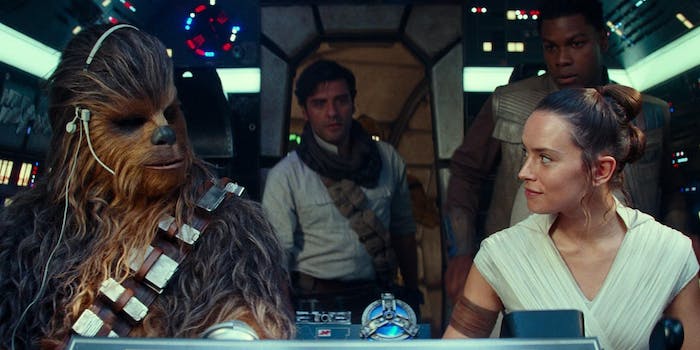 An alleged early 'Rise of Skywalker' draft by Colin Trevorrow and Derek Connolly has leaked online.

An alleged early draft of The Rise of Skywalker screenplay has leaked online, fanning the flames of conspiracy theories about narrative problems in the final film. The screenplay is credited to Star Wars IX’s original writers, Colin Trevorrow and Derek Connolly, and went viral thanks to the popular /r/StarWarsLeaks subreddit and a YouTuber called Robert Meyer Burnett, who posted a two-hour review of the script.

Neither Disney nor the two former Star Wars screenwriters have confirmed the screenplay is genuine (after all, there are a lot of fake “leaks” out there, including one that Trevorrow publicly debunked on Twitter), but A.V. Club was “able to independently confirm” that it’s the real deal. It’s also total catnip for disgruntled Star Wars fans, because it’s full of intriguing ideas that don’t appear in the final draft by J.J. Abrams and Chris Terrio. Trevorrow and Connolly only retained a “story by” credit on The Rise of Skywalker, while the screenplay was fully credited to Abrams and Terrio. Trevorrow, who now directs the Jurassic World franchise, announced last year that he’d donate his Star Wars residuals to a children’s hospice charity.

The Trevorrow/Connolly screenplay features more screentime for Rose Tico, continuing her partnership with Finn while Poe and Rey go on a separate mission. Palpatine only has a minimal, non-resurrected role, and the main plot involves Kylo Ren searching for a new master in the form of Palpatine’s ancient mentor, who is tantalizingly described as “Lovecraftian.” And in this version of the story, Rey’s parents were indeed “nobodies”—who Kylo Ren has already killed. The title was Duel of the Fates, a callback to one of the most iconic elements of The Phantom Menace, the music accompanying the lightsaber battle between Darth Maul, Obi-Wan Kenobi, and Qui-Gon Jinn.

This screenplay sounds like a more organic continuation from the previous two movies, with Rey and Kylo Ren each seeking out their own paths as Force-users rather than being shoved in a new direction by a confusingly-resurrected Palpatine. Both characters struggle with whether to continue the Jedi/Sith traditions and Rey keeps trying to win Kylo Ren back to the side of light, with Leia doubting that it’s possible.

It’s tempting to imagine what Duel of the Fates might have looked like. It’s also surprising to realize that it might’ve been less controversial than The Rise of Skywalker, because when Connolly and Trevorrow left the project in 2017, the general feeling was one of relief. Initially rising to prominence for directing the indie sci-fi movie Safety Not Guaranteed (written by Connolly), Trevorrow went on to direct the blandly underwhelming Jurassic World. He also made The Book of Henry, an indie drama that earned infamously appalling reviews in 2017. Trevorrow didn’t exactly have a reliable track record, and his treatment of female characters was far from reassuring. When J.J. Abrams returned to co-write and direct the final Star Wars film, it felt like the franchise was back in safe hands.

While parts of this draft may sound preferable to the final product, it’s a mistake to compare The Rise of Skywalker with a movie that doesn’t actually exist. For one thing, most people are making judgements based on snapshots they read online, rather than reading the full script. For another, we have no way of knowing what a completed Trevorrow/Connolly film would actually look like. This screenplay could never be filmed in its current form, because it was drafted in December 2016, shortly before Carrie Fisher’s death. Star Wars IX had to be radically rewritten after she passed away, and it seems like Disney and Lucasfilm weren’t happy with whatever Trevorrow and Connolly came up with. In the end, J.J. Abrams returned to direct and co-write with Chris Terrio, and together they came up with The Rise of Skywalker, a film whose structure suffers thanks to its repeated attempts to include archival clips of General Leia.

The Rise of Skywalker was disappointing to many fans, for a multitude of reasons. However, it’s probably not a good idea to dwell on leaked early drafts. People are latching onto this screenplay for the same reason they got invested in the #ReleaseTheJJCut conspiracy theory: we want there to be some secret “better” version of the movie out there, waiting to be recovered. Fans want to be able to blame The Rise of Skywalker’s problems on one specific entity (J.J. Abrams, or Kathleen Kennedy, or the specter of “studio interference”), but if anything, the film’s creative trajectory highlights how many moving parts were involved. Regardless of whether you love or hate The Last Jedi, you’ll probably agree it was shaped by the vision of one man, Rian Johnson. By contrast, The Rise of Skywalker feels like the messy result of multiple conflicting influences.

It’s still wild to consider that the sequel trilogy didn’t follow a pre-planned outline from the start. Rian Johnson wrote The Last Jedi in response to The Force Awakens. Trevorrow and Connolly drafted Star Wars IX in response to The Last Jedi, and then Jack Thorne (Harry Potter and the Cursed Child) was hired to deliver rewrites that never saw the light of day. Abrams and Terrio wound up rewriting the whole thing after Carrie Fisher’s death, clearly influenced by the online backlash against The Last Jedi. Remember, this Trevorrow/Connolly draft was allegedly written a full year before The Last Jedi came out. We don’t know which narrative choices in The Rise of Skywalker came directly from Abrams and Terrio, and which were a collective decision from studio executives. Or, indeed, which of these people was more concerned about appeasing the online mob of Last Jedi haters—something that clearly influenced certain decisions, like the blatant sidelining of Rose Tico. Considering the film we ended up seeing, it’s hard to imagine a scenario where Trevorrow and Connolly’s screenplay survived 2018 in any recognizable form.