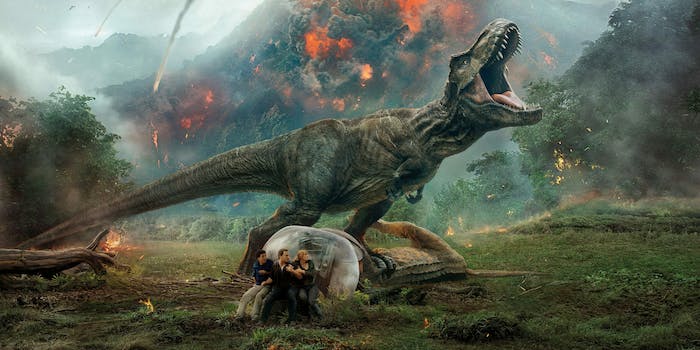 The introduction of political themes somehow makes this film even more stupid.

Jurassic World: Fallen Kingdom wants to be a thought-provoking blockbuster about wildlife conservation, but it’s really, really not. It’s hard to swallow such a lofty political theme when it’s such a blatant excuse for more dinosaur-on-dinosaur violence. Better to skip the deeper meaning, and acknowledge your bloodthirsty desire to see a stegosaurus get barbecued by a lava flow.

Directed by J.A. Bayona and written by Jurassic World‘s Colin Trevorrow and Derek Connelly, Fallen Kingdom sees Owen Grady (Chris Pratt) and Claire Dearing (Bryce Dallas Howard) team up to rescue Jurassic World’s abandoned dinosaurs from a volcanic eruption. In the years since the last movie, Owen has been building a house by hand; he’s that kind of guy. Claire is now a full-time dinosaur conservation activist, lobbying politicians to fund a rescue mission before Isla Nublar explodes.

When the suits in Washington refuse to help (of course), Claire turns to a wealthy benefactor (Rafe Spall) who wants to collect some dinosaurs for his own purposes. Dinosaur rights have apparently become a hot-button political issue, and I can’t decide if this is ludicrous or eminently plausible. Either way, it would be more interesting if the writers bit the bullet and set this thing in Trump’s America. Then they could replace Fallen Kingdom‘s line of generic Hollywood politicians with some realistically weird new appointees. Even Jeff Goldblum’s brief cameo is an uncharacteristic snooze.

For the journey to Isla Nublar, Owen and Claire recruit a couple of stock-character sidekicks: a hapless nerd (Justice Smith) and a tough-talking veterinarian with trendy tattoos (Daniella Pineda). Perhaps cynically, I note that they vanish for the middle third of the movie, allowing the lead characters (all of whom are white) to handle the meaningful part of the story.

In Jurassic Park, Spielberg struck a perfect balance between lovable heroes, miraculously believable worldbuilding, and scenes where dinosaurs were either adorable wildlife or deadly monsters. Fallen Kingdom repeats these elements in unbalanced measures, lacking Jurassic Park’s sense of wonder. It also uses an oddly paced structure that feels more like two movies stitched together. The first is an action flick about escaping a volcanic eruption. The second is a dinosaur-infused corporate thriller co-starring John Hammond’s previously unmentioned partner (James Cromwell) and his young granddaughter Maisie (Isabella Sermon). It’s hard to get invested in anyone, beyond the vague way we side with the protagonist of any blockbuster.

Fallen Kingdom is thankfully less sexist than its predecessor. However, you get the impression that its all-male creative team became fixated on the first film’s shoe-related backlash. Several times, the camera makes sure we know that Claire is wearing situationally appropriate footwear. So they resolved the issue of making a woman flee from dinos in high heels, failing to realize that many of Jurassic World’s problems originated with its male lead.

Pratt plays the kind of masculine stereotype that is lovingly parodied by his Parks & Rec co-star Nick Offerman. The difference is, Offerman’s Ron Swanson is a gruff sweetheart while Owen Grady is a jackass. He’s a bacon-scented Yankee Candle come to life. Persistently obnoxious, we’re meant to interpret his relationship with Claire as a kind of Han Solo/Princess Leia sexy bickering. But when he’s not saving Claire’s life, he’s usually negging her.

This time around, I was interested to note how Owen interacted with other characters compared to Claire. As a rugged outdoorsman who brags about outrunning raptors on a motorbike, you could plausibly imagine him disrespecting Justice Smith’s cowardly nerd character. But in 2018, we recognize this as bullying, so the film depicts them having a cordial relationship. In fact, Owen is generally nice to anyone who isn’t a villain. He’s just mean to Claire because he finds her attractive. He also never changes to meet Claire’s expectations, whereas Claire has visibly softened and become more adventurous since the first movie. This creates a dynamic where, if they end up together, it feels like Owen has achieved some kind of a victory. Hardly an equal partnership or a desirable romantic goal.

Even for such a transparently commercial franchise, Jurassic World: Fallen Kingdom is a flimsy, cynical retread of better material. It’s also aggressively stupid, and not in a fun way like Fast & Furious. At this point, I’d prefer to just watch a feature-length wildlife movie about the dinosaurs hanging out in the park. Blissfully free from Pratt’s smirk, and Universal Pictures’ velociraptor-like hunger for infinite sequels.