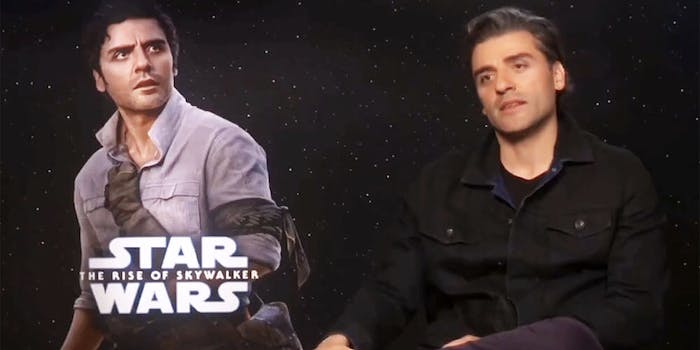 'The Disney overlords were not ready to do that.'

Of the many, many gripes about Star Wars: The Rise of Skywalker, which was released nationwide on Friday to downright tepid reviews, it’s that fans were robbed of a romance between Poe and Finn. It seemed pretty clear that there had been a sort of sexual tension building between the two characters in the first and second films of the trilogy. In the end, they were both nudged in the direction of women characters.

But apparently no one had been rooting for a Poe/Finn romance more than Oscar Isaac himself, who did not hold back when asked about the possibility while doing the press rounds for The Rise of Skywalker.

“There could have been a very interesting forward-thinking, or not even forward-thinking, just like, current-thinking, love story there,” Isaac said in an on-camera interview. “You know something that hadn’t quite been explored yet, particularly the dynamic between these two men in war, falling in love with each other.”

Disney: Oscar stop it or our lawyers will be in contact

Oscar: let’s do it baby I know the lawpic.twitter.com/eFriPWp3g8

“And I would try to push it a bit in that direction,” he continued. “The Disney overlords were not ready to do that.”

WELP. It did not seem to help that director J.J. Abrams, who took back control of the trilogy from Rian Johnson after The Last Jedi in 2017, also claimed that he did not envision a relationship between Poe and Finn.

“That relationship to me is a far deeper one than a romantic one,” Abrams said in an interview with Variety just a few weeks before The Rise of Skywalker was released. “It is a deep bond that these two have, not just because of the trial by fire in which they met, but also because of their willingness to be as intimate as they are.”

OK, cool story, J.J. Abrams—and one that few Poe-Finn shippers are unlikely to buy, as many took to Twitter to rally around Isaac.

Every day I’m grateful for Oscar Isaac screaming from the rafters that he tried his darnedest to make Poe queer https://t.co/Tec7fK2f1Z

Disney Exec: *punches Oscar Isaac in the face* Say it. Say that Poe Dameron is straight.
Oscar Isaac: *spits blood onto the floor* Fuck you. pic.twitter.com/aRp2jjwj8C

oscar isaac in every interview for tros pic.twitter.com/E8EHLyt0tO

Every queer in Hollywood now that Disney owns everything https://t.co/D0BypH9yY6 pic.twitter.com/uygPwhUxWo

Disney has yet to feature an openly gay main character in any of the studio’s films, and even in the light of the Poe/Finn controversy, that seems unlikely to change anytime soon. All we’ve gotten so far is blink-and-you-miss-it moments, like The Rise of Skywalker‘s kiss between two minor women characters.