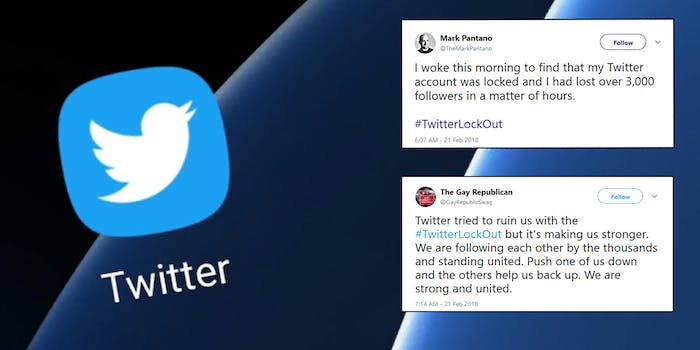 They say the deletion of accounts is a suppression of free speech.

A number of far-right users of Twitter complained on Wednesday morning that they had lost hundreds or thousands of followers, accusing the social media company of banning accounts that agreed with them.

Soon enough, #TwitterLockout began trending—with those on the right claiming the company was suppressing free speech, while others suspecting the disappearing accounts may have been “bots” or “artificial followers.”

Who else lost thousands of followers overnight?

Twitter did not respond to a request for comment from the Daily Dot regarding the sudden disappearance of some accounts.

Following a January report in the New York Times about the business practices of a company called Devumi, which allegedly sold fake followers to athletes, entertainers, and others to inflate their sense of popularity on Twitter, the company said it would “continue to fight hard to tackle any malicious automation on our platform as well as false or spam accounts.”

Late last year, conservative Twitter users also went into a frenzy after the company updated its terms of service and suspended accounts in what became known as the “Twitter purge.”

Accounts that were suspended during the “purge” included white nationalists and other accounts that spread hateful messages, such as Jayda Fransen, the deputy leader of Britain First, a far-right group that President Donald Trump retweeted several anti-Muslim videos from.

The Daily Dot has reported on the vast number of “egg” or suspected “artificial followers” that make up a large number of the president’s Twitter following. It appears, however, that Trump’s account was not affected by Wednesday’s #TwitterLockout. In fact, his following appears to have grown.

While conservatives lamented the loss of followers, other Twitter users poked fun at their extreme reaction.

The most hilarious thing about people shrieking about Twitter's bot purge is that they are equating losing fake followers with…having their own speech suppressed? Or something? It's not very well thought out. #twitterlockout

Update 1:15pm CT, Feb. 12: A Twitter spokesperson told the Daily Dot that it enforces its rules “without political bias.”

“As part of our ongoing work in safety, we identify suspicious account behaviors that indicate automated activity or violations of our policies around having multiple accounts, or abuse,” a company spokesperson said in an email. “We also take action on any accounts we find that violate our terms of service, including asking account owners to confirm a phone number so we can confirm a human is behind it.”

The spokesperson said the efforts were part of a process to make “Twitter safer and healthier for everyone.”