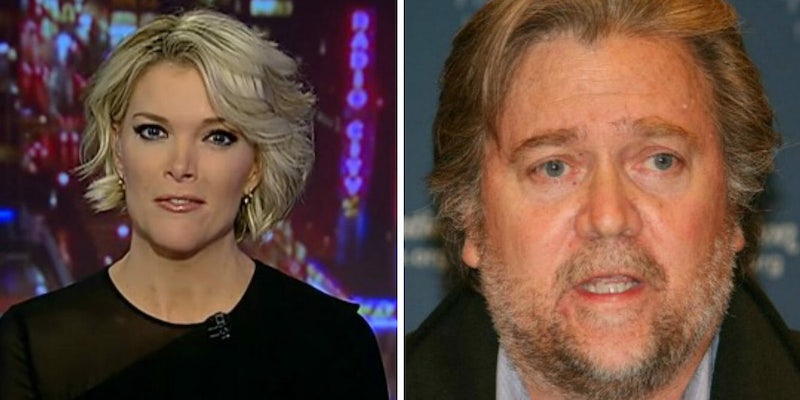 Steve Bannon told Roger Ailes that Megyn Kelly is ‘the devil, and she will turn on you’

Bannon thinks Megyn Kelly was the breaking point between Fox News and Breitbart.

With Bill O’Reilly now out at Fox News, following the departure last summer of ex-chairman Roger Ailes due to his own history of alleged sexual harassment, White House adviser Steve Bannon thinks he has a pretty good idea of how this is all started.

According to Politico, the former Breitbart chairman was working to become friends and partners with Fox News, but Bannon said the relationship took a turn for the worst when former host Megyn Kelly harshly questioned President Donald Trump about his treatment of women during the first Republican primary debate in August 2015.

“The big rift between Breitbart and Fox was all over Megyn Kelly. She was all over Trump nonstop,” Bannon told Politico. “I told [Ailes] then, I said, ‘She’s the devil, and she will turn on you.’”

In November, it was revealed that Kelly had accused Ailes of sexual harassment, writing in her memoir that he made sexually inappropriate comments to her, said he would advance her career “in exchange for sexual favors,” and tried to kiss her on the lips in January 2006.

Later, Fox News personality Sean Hannity accused Kelly of supporting Hillary Clinton during the presidential election. In January, Kelly left Fox for NBC News, and it was recently revealed that O’Reilly played a factor in her departure.

But after the first debate, it was clear what Trump thought of Kelly, and he wasn’t shy about expressing it.

I refuse to call Megyn Kelly a bimbo, because that would not be politically correct. Instead I will only call her a lightweight reporter!

As Politico writes, some believe the first debate was when Breitbart and Fox News fractured. After the debate, Breitbart wrote that Kelly was an attention grabber, and Bannon said Ailes later called him and said, “You gotta knock this off.” Bannon refused.

When Trump won the Republican nomination, Fox News began backing Trump and the feud between Fox and Breitbart was, more or less, settled. But Bannon clearly hasn’t forgotten about Kelly. And Kelly made it clear in December, via Raw Story, what she thought about Bannon, Breitbart, and the white nationalist movement, saying it’s “a dangerous game to empower them, as clearly has happened.”

“I mean, Steve Bannon is the chief adviser to our president-elect, and I understand the argument that he’s just a provocateur and he comes up with these crazy headlines and they want clicks, but if you look at what’s happened to Breitbart over the last three years, it’s shocking,” Kelly said. “This is something else entirely, and I don’t know that Trump can stop it. I don’t know who, if anyone, can stop it.”