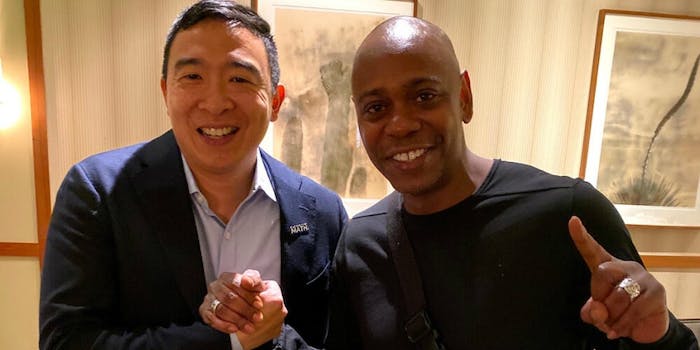 Chappelle joins the ever-growing list of celebrities who endorse Yang.

On Tuesday, the Yang campaign sent out a press release announcing Chappelle’s endorsement and two of his shows to benefit the campaign.

The endorsement is big for Yang as he has described himself as a “huge fan” of Chappelle. In August, Yang tweeted that Chappelle might just be his favorite comedian after attending one of Chappelle’s shows.

“Dave is one of the most important voices in our country today and I’m thrilled he has thrown his support behind this campaign,” Yang said in the release. “He and I share similar concerns about the future and hopes for what it could be. We are also parents who see the world that we are leaving to our kids and believe they deserve better.”

Donald Glover similarily endorsed Yang in December. Glover and Yang held a pop-up event in California called “The 46 Campaign,” where they dropped some “collaboration merch.”

Chapelle’s shows will be held in South Carolina on Jan. 29 and 30.