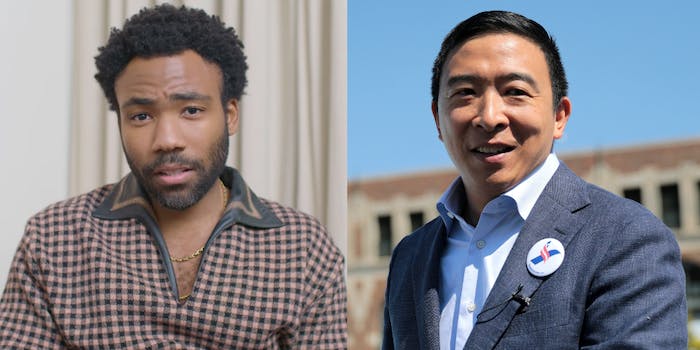 Childish Gambino is part of the #YangGang.

Actor and musician Donald Glover is teaming up with Democratic presidential candidate Andrew Yang to drop some merch.

Glover, also known by his rap name Childish Gambino, revealed in an Instagram story on Wednesday plans for a pop-up event with Yang in California called “The 46 Campaign.”

Set to take place in Los Angeles, California, on Thursday, the event will begin at noon local time at 507 N. Fairfax Ave. and will feature “collaboration merch.”

“Thank you @donaldglover – you see and create the future,” Yang said.

Thank you @donaldglover – you see and create the future. 🙏🚀

Few other details have been offered thus far. It remains unclear as to whether Glover will perform during the event. The Daily Dot reached out to Glover for comment but did not receive a response by press time.

Glover is not the first popular artist to vocally join the Yang Gang. Rock band Weezer also showed its support for the candidate by playing at a November rally in Des Moines, Iowa. Rivers Cuomo, the band’s lead vocalist, has also made contributions to Yang’s campaign.