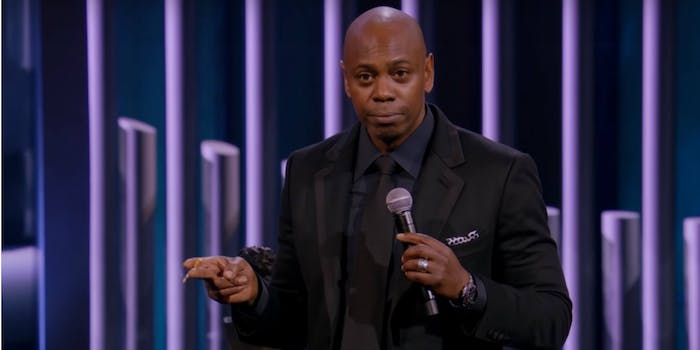 Chappelle's heartfelt speech was dinged by one throwaway line.

Dave Chappelle looked back on his career during his acceptance speech for the Mark Twain Prize. He recalled toughing out comedy clubs as a teenager. He gave nods to the people who inspired and supported him. He also joked, “I’m gay.”

The acceptance speech, which was given at the ceremony in October but officially released by the Kennedy Center earlier this week, is less than 10 minutes long, and Chappelle uses part of his time to defend and survey the standup comedy “art form,” though not necessarily the “content.” Right after that bit, he states: “What I really wanted to say tonight, and I’m glad I get the platform to do it: I’m gay. I can’t wait to see what this does for my career, being gay like this.”

It’s a throwaway moment in an otherwise heartfelt speech, one in which he imparts that his mother was instrumental in teaching him about “oral tradition” and African history, and would come watch his sets after working all day. It was met with some backlash, of course, but Chappelle knows what he’s doing with that line. His 2019 special, Sticks & Stones, addressed the mythical career-ending power of cancel culture and doubled down on jokes about LGBTQ culture. His earlier Netflix specials had similar blind spots on gay and trans people. Chappelle’s Show, as formative and influential as it was, often fell back on stereotypical depictions of gay people.

Dave Chappelle: I am gay haha can't wait to see what this does for my career haha

In the acceptance speech, he mentions that he knows comedians who are “very racist” and when he watches them onstage and people laugh, he knows there’s truth to what they’re saying. It’s not clear where Chappelle was directing that, but the speech hinged more on the right of comedians to say what they want and not back down from it, no matter what, and Chappelle is in a rarefied place where he can do that. “I don’t think there’s an opinion that exists in this country that is not represented in a comedy club by somebody,” he muses.