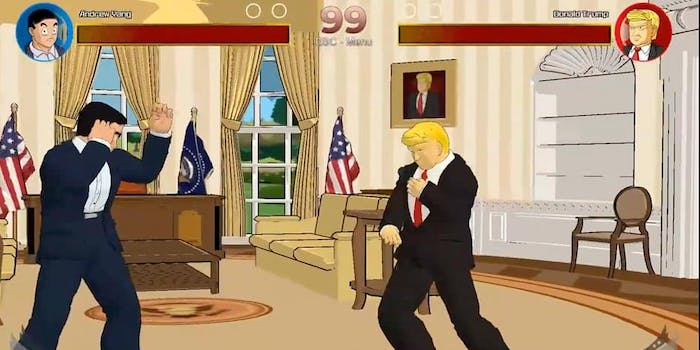 'Video games cause violence, and so do I,' Trump says during the boss battle.

“Andrew Yang is unstoppable on his path to presidency!” a description of the game reads. “Play through all of the ups and downs of his campaign journey as you battle the other candidates, the naysayers and of course President Trump!”

But it’s not just the other candidates you’ll face in your quest to the Oval Office. The game even pits Yang against unlikely characters, such as podcast host Joe Rogan. In fact, the man behind the game, 34-year-old Sam Vallely, says Yang’s February appearance on The Joe Rogan Experience is what first introduced him to the entrepreneur turned presidential hopeful.

Speaking with the Daily Dot, Vallely, a game designer from Clackmannanshire, Scotland, says that even though he can’t vote in an American election, Yang’s message was inspiring enough to convince him to promote the candidate through the best way he knows how.

Much like Yang, Vallely says he has been concerned about the impact of automation on middle-class workers for close to a decade. So much so that he has long been known among friends as the “robots and money” guy.

The game first began roughly five months ago as a crude 3D matchup between just Yang and Trump in the White House. The Yang game has since developed into a polished and nearly full-fledged product, complete with a story mode, signature moves, and unique locations.

Players can unleash moves such as the Freedom Dividend, based on Yang’s flagship universal basic income proposal, against opponents, such as former Vice President Joe Biden and his single bloodshot eye.

The story mode also appears to show cut scenes in which Yang appears on a version of MSNBC, the network he recently accused of “suppressing” his campaign.

Set for release on Dec. 30, the game will be available at online gaming platform Steam for both Windows and Mac users.

While Yang has not publicly acknowledged the game so far, it seems likely he’d enjoy it. The candidate stated on Twitter back in September that he spent much of his teenage years playing Street Fighter II in New Hampshire.