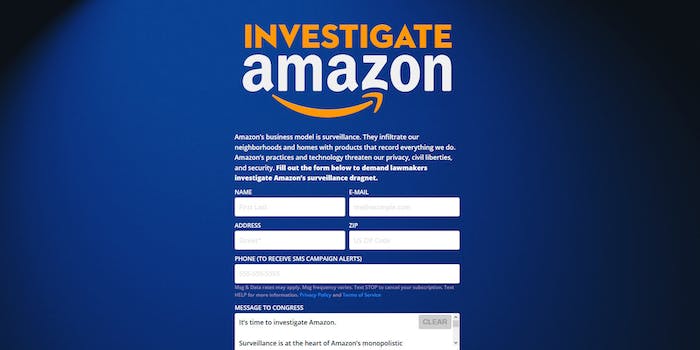 The push comes as some lawmakers have begun to probe the company.

Nearly 40 internet rights groups, advocacy groups, and organizations are asking members of the public to help push Congress to investigate Amazon‘s “surveillance empire,” including its doorbell Ring and its facial recognition technology.

The groups—which include Fight for the Future, Color of Change, Media Justice, and Demand Progress, among others—created a website, InvestigateAmazon.com, that allows people to send letters to both Congress and their local officials demanding that they investigate Amazon and call on its executives to testify before Congress.

“Surveillance is at the heart of Amazon’s monopolistic business model,” the letter to Congress reads, later adding: “Amazon needs to be held accountable. I’m calling on you to investigate Amazon.”

Specifically, the letters bring up concerns with the company’s use of its facial recognition technology Rekognition, and Ring doorbells, both of which have faced stiff criticism in recent months.

Some members of Congress may be receptive to the movement.

The letter came one day after Markey released answers the retail giant gave to him about Ring’s relationship with law enforcement agencies, which revealed Amazon allows police departments to hold on to Ring footage indefinitely.

Fight for the Future also drew attention to the company’s facial recognition technology earlier this month when it scanned the faces of more than 13,000 people in Washington, D.C. using Reckognition.

The demonstration, which was live streamed, was meant to raise awareness about a lack of federal laws surrounding the use of facial recognition technology.