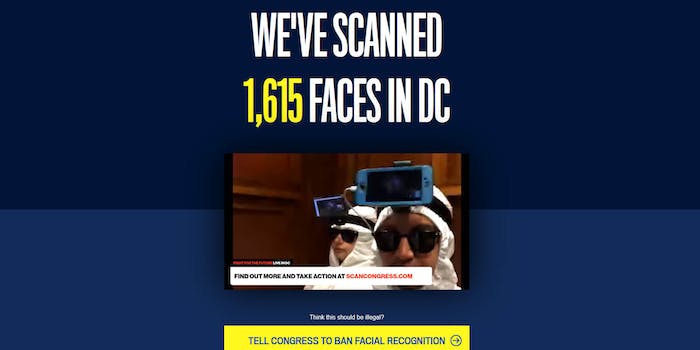 As of mid-morning on Thursday, the group had scanned more than 6,000 faces.

Digital rights group Fight for the Future is scanning faces around Congress today to raise awareness about a lack of federal laws surrounding the use of facial recognition technology.

A trio of protesters are walking the halls of Congress and around Washington, D.C. on Thursday, dressed in white jumpsuits and wearing phones strapped to their head that are running Amazon’s facial recognition technology “Rekognition.”

The demonstration is being live streamed by Fight for the Future on ScanCongress.com, where the group is listing how many faces it has scanned including whether they are lawmakers, members of the public, lobbyists, or members of the press.

The scans of people’s faces will be cross-checked against a database, the group said.

“This should probably be illegal but until Congress takes action to ban facial recognition surveillance, it’s terrifyingly easy for anyone—a government agent, a corporation, or just a creepy stalker—to conduct biometric monitoring and violate basic rights at a massive scale,” Evan Greer, the deputy director of Fight for the Future, said in a statement.

“We did this to make a point. And we’re going to delete the data that we collect. Someone else could use the same technology to do unimaginable harm. We need an immediate ban on law enforcement and government use of face surveillance, and should urgently and severely limit its use for private and commercial purposes.”

As of noon on Thursday, the trio had scanned more than 12,000 faces.

Facial recognition technology has been fiercely criticized in recent months. Both activist groups and some 2020 Democrats have criticized the use of it.

Fight for the Future is leading a coalition of more than 30 groups that have called for a ban on the use of the technology among law enforcement.

Sen. Bernie Sanders (I-Vt.), a 2020 Democratic hopeful, has called for the same thing as part of his criminal justice reform plan. Former 2020 contender Beto O’Rourke also opposed its use in law enforcement.

Several cities, including San Francisco and Oakland, California have banned the technology’s use.