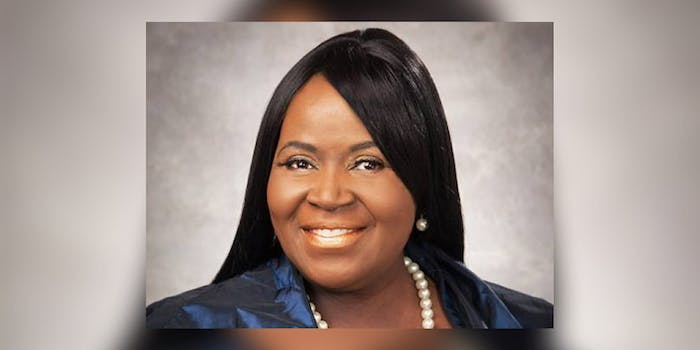 He thought her mother and daughter waiting in the car were there for a 'drug house.'

The summer of (white) strangers calling the cops on Black people who are minding their own business seems to never end. In Madison, Wisconsin, a constituent called the cops on a local Black politician for having her mother and daughter sitting in their car while she went door-to-door campaigning. The constituent thought the family was “waiting for drugs at the local drug house” and wanted them “moved along.”

According to the Cap Times, Shelia Stubbs, a 12-year veteran of the Dane County Board of Supervisors, is running for state assembly. She was walking around the predominantly white neighborhood and introducing herself to constituents when she saw a squad car next to her car and asked the officer what happened. At the time she had been in the neighborhood for only 20 minutes and had knocked on five or six doors, talking to several residents.

According to the notes from the call, made on Aug. 7, someone had called about the car that Stubbs’ 71-year-old mother and 8-year-old daughter were sitting in. The caller thought they were waiting for a “drug house” to open.

“FULLY OCCUPIED SILVER 4 DR SEDAN NEWER MODEL – THINKS THEY ARE WAITING FOR DRUGS AT THE LOCAL DRUG HOUSE – WOULD LIKE THEM MOVED ALONG,” the notes read.

“ONGOING PROBLEM — DRUG HOUSE IS [REDACTED] — SAYS NO ONE IS AT THE DRUG HOUSE NOW — SAYS THIS IS COMMON OCCURRENCE FOR [VEHICLE] TO SIT AROUND UNTIL SOMEONE SHOWS UP,” additional notes, reported by BuzzFeed News, read.

Stubbs told the Times she felt heartbroken and humiliated once the officer told her, and that she wasn’t doing anything wrong and deserved to be there. It’s unclear the race of the person who made the call, but the caller was a man, as identified in the report.

Stubbs, a Democrat, faces no Republican opposition for the general election and is poised to become the first African-American elected to represent Dane County, Wisconsin’s 77th Assembly District.

“It’s 2018. It shouldn’t be strange that a Black woman’s knocking on your door. I didn’t do anything to make myself stand out. I felt like they thought I didn’t belong there,” Stubbs said. “I belong where I choose to go. You don’t have to like me. You don’t even have to respect me. But I have a right to be places.”

While Stubbs found the call degrading, humiliating, and insulting, her interaction with the responding officer was more positive. Stubbs said she ended her conversation with Officer Katherine Bland by her and her mother giving Bland their phone numbers, and offering to help her with improving race relations in the area.

Stubbs isn’t the only Black politician to have been accosted by law enforcement, or even constituents, while out canvassing. In July, Oregon Rep. Janelle Bynum, the only Black member of the Oregon House of Representatives, had the police called on her as she went door-to-door campaigning, the calling constituent concerned she was planning burglaries because she was taking notes on her phone. And in August, days after Stubbs had the cops called on her, New York Sen. Jesse Hamilton (D-Brooklyn) had the police called on him by a white woman because he was in public, speaking to voters against President Donald Trump‘s immigration policies.

And those are just the 911 calls that were made on Black politicians. This summer, multiple white people found themselves named and shamed after calling the police on Black people who were going about their own business, and not doing anything to hurt anyone, including BBQ Becky, Pool Patrol Paula (who additionally assaulted a Black teenager and was arrested for doing so), and the Starbucks employee who called 911 on two Black men for waiting for a friend.

Stubbs told the Times she hopes that whoever made the call on her and her family reads her side of the story and contacts her, hopefully to learn more about her, but to also explain why he decided to call the cops.