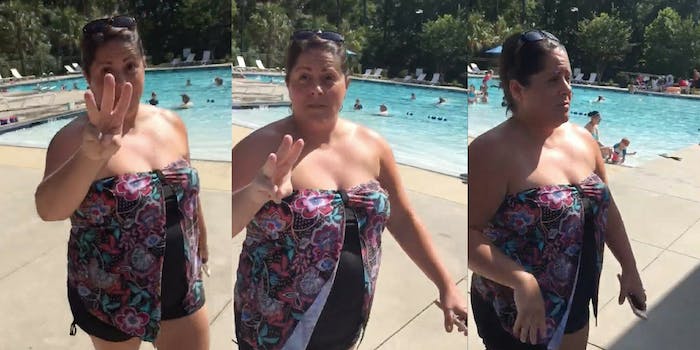 She assaulted a teenager, then assaulted two police officers who arrested her for the first assault.

A white woman who repeatedly hit a Black 15-year-old at a pool while attempting to boot him and other teenagers from the facility has been arrested, fired from her job, and become the latest white woman to be recorded while policing Black people for seemingly no reason.

South Carolina resident Stephenie Sebby-Strempel, or “Pool Patrol Paula” as the internet is calling her, is now out on bail and faces three charges related to her assault of the teenager and later assaults on police.

WCSC-TV reports that the teenager and his friends were at the Reminisce Community pool in Summerville, South Carolina, on Sunday, June 24. According to the incident report, the teen said that Sebby-Strempel, 38, told him and his friends that they “didn’t belong” and needed to leave.

The teenager said he was staying at a friend’s house, the father of whom had a friend who lived in the Reminisce Community. The community member had invited the teenager and the family he was staying with to go swimming, the teen told police. The friend’s father confirmed the swimming invitation with police.

In video footage recorded by the teen, Sebby-Strempel is seen telling him to “get out” twice before hitting at him. The footage doesn’t show Sebby-Strempel using racial slurs.

She then calls the teenagers “little punks” before hitting at the teen recording the video once more.

Rhe Capers, the Facebook user who shared the video, wrote in a post that she’s the 15-year-old’s aunt and characterized Sebby-Strempel as “extremely aggressive” and “invading” the teen’s personal space. Capers said Sebby-Strempel was employed by multilevel marketing company Rodan + Fields, and that her husband, James Strempel, worked for the U.S. Coast Guard. Capers also wrote that the family of the teen had filed a police report.

Other photos taken at the scene show Sebby-Strempel giving the teenager the middle finger and hitting him.

On Monday, June 25, police arrived at Sebby-Strempel’s home with an arrest warrant for a third-degree assault and battery charge for hitting the teenager. She reportedly pushed one officer into a wall and bit another officer on the arm, breaking the skin. Sebby-Strempel has been charged with two additional charges: one count of assaulting, beating or wounding a police officer, and another count of resisting arrest, the station reported. Her bond was set for $65,000 on Tuesday, and she’s currently out on bond, Capers wrote on Facebook.

Across social media, critics of Sebby-Strempel began calling her “Pool Patrol Paula” in line with nicknames of other white women who have gone viral for attempting to police Black people. In each incident, the actions of Black people didn’t concern the white women and weren’t actions worthy of calling the police or responding with combative behavior.

Not only did Sebby-Strempel face criticism for a pointedly race-based act of violence, but the internet called for her to be fired from Rodan + Fields, under which she was an “independent contractor.”

Rodan + Fields first stated that it doesn’t “condone violence” and would look into the situation. After critics pushed back harder, the company made a statement to Racked on Thursday saying that it had cut ties with Sebby-Strempel.

In April, Oakland, California’s BBQ Becky went viral because she called the police on Black people grilling in a public park. She claimed to be concerned about their use of charcoal in a non-charcoal area, though she later lied to police that the woman recording her had hit her.

On Sunday, the same day as the incident involving Pool Patrol Paula, another white woman in San Francisco pretended to call the cops on an 8-year-old child selling water. The child was trying to raise money for Disneyland tickets, and the woman, dubbed Permit Patty by the child’s mother, has since resigned as CEO of her cannabis company.

The nicknames are just a nuance of social media reaction to a string of incidents over the past year involving white people getting upset at or calling police upon Black people for simply going about their business, such as attempting to use a Starbucks restroom, checking out of an Airbnb property, and sleeping in a college dorm space.

These, of course, are only the high-profile cases of racial discrimination as far as recent instances go and are only a few months of tens of decades of discrimination in U.S. history. Not to mention, Sebby-Strempel assaulted two police officers while evading arrest and was still arrested alive and unharmed, something that cannot be said for many Black people who encounter police.

According to someone identifying themselves as a member of the U.S. Navy, Sebby-Strempel’s husband had a message for Capers. The Facebook user, Dee L. Smith, wrote that Capers “should get both sides of the story” and said the teenager had threatened to “crack her bitch ass'” before he started recording the altercation between him and Sebby-Strempel.

“This is a situation that should have never happened. It was taken out of context and out of control … No child including mine or anybody else’s ever, ever, deserves that type of abuse or treatment,” Deanna RocQuermore, the mother of the victim, told the publication. “And to be struck not once, not twice, but three times by someone that is upset because of the color of someone’s skin, and they don’t belong at their swimming pool.”