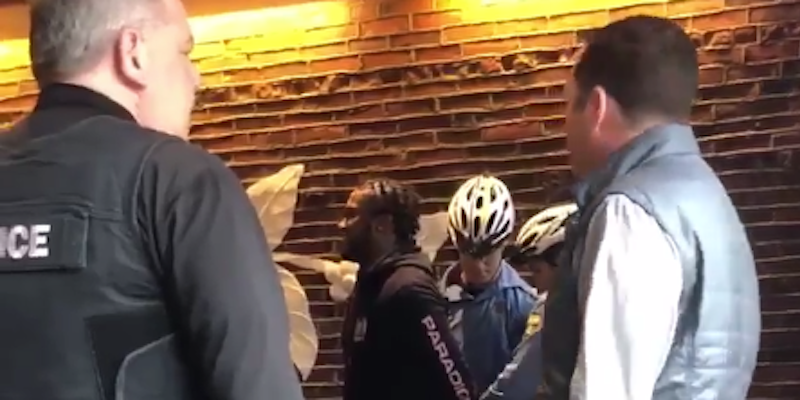 The incident is under investigation.

Starbucks and the Philadelphia police department are both conducting internal investigations following the arrest of two Black coffee shop patrons who were reportedly seated and waiting for a friend at a Philadelphia location.

The incident happened Thursday and apparently began after a tipster called the police to report that the two Black men were sitting at the Starbucks without having made a purchase. Philadelphia police arrived at the scene, handcuffed the men, and took them into custody. Author Melissa DePino happened to be nearby when the arrests happened and caught the end of the interaction with her phone’s camera. She shared the video on Twitter, where it quickly went viral.

The two would-be customers can be seen held in handcuffs by officers in DePino’s clip, while a bystander repeatedly asks the officers to clarify what it is that the men are being charged with. A second bystander replies, “They didn’t do anything, I saw the entire thing.”

DePino updated her thread throughout the day Friday as she learned more information. Apparently, the men were held late into the night, but they were eventually released around 2am on Friday. The Philadelphia District Attorney’s office reportedly declined to arraign the pair—in other words, the men weren’t charged with anything.

DePino was surprised to find that many of the white people replying to her tweets were saying “there must be something more to this story.”

“That assumption is a big part of the problem,” she wrote. “It does happen. All the time. Just not to you and me. Believe it and speak up.”

Ever since I posted this, I’ve had white strangers AND friends say “there must be something more to this story.” That assumption is a big part of the problem. It does happen. All the time. Just not to you and me. Believe it and speak up.

Late Friday, both the Philadelphia police department and Starbucks tweeted that they were aware of the situation and looking into the matter.

We’re aware of the incident on Thursday in a Philadelphia store with 2 guests and law enforcement, resulting in their removal. We’re reviewing the incident with our partners, law enforcement and customers to determine what took place and led to this unfortunate result.

We are aware of an incident that occurred on 4-12-18 at the Starbucks Café at 18th and Spruce. The entire incident, including the actions of the responding officers, is under internal investigation. Once we gather all the facts, we will comment further.

The story broke in the same 24-hour period that an unrelated Michigan 14-year-old was shot at by a white neighbor while trying to ask for directions after missing his school bus.