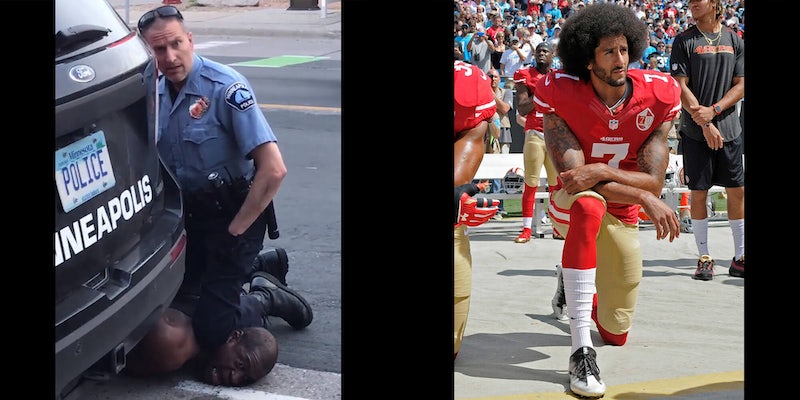 'Do you understand now? Or is it still blurred to you?'

A video of Floyd’s death has prompted widespread outrage online and protests in Minnesota. In the video, a white police officer is seen with his knee on Floyd’s throat as he can be heard saying, “I can’t breathe!” and begging the police to remove it. Floyd died shortly afterward.

People flooded the streets in Minneapolis, Minnesota last night to protest the death of the 46-year-old Black man. Local news outlet WCCO said police showed up in riot gear and fired tear gas and flash grenades at the protesters.

Meanwhile, protests surged online. There were trending hashtags dedicated to Floyd’s death and celebrities have been weighing in. Basketball star LeBron James posted a political meme to his Instagram.

The meme has a picture of the cop’s knee on Floyd’s neck next to a photo of Colin Kaepernick kneeling at a football game. The quarterback is famous for kneeling during the U.S. “National Anthem” in protest of police violence against people of color.

James captioned the photo, “Do you understand now? Or is it still blurred to you?”

On his Instagram story, the basketball star also shared photos and videos of the viral video with his 65 million followers.

Four officers have been fired since the video went viral.