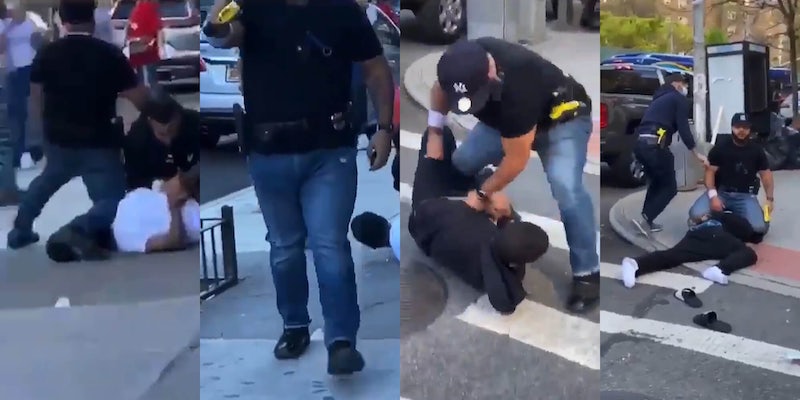 New York City police were caught on video using a Taser and slamming a man to the ground during a social distancing crackdown that resulted in three arrests on Saturday.

Members of the New York Police Department broke up a group of pedestrians standing outside a corner store who allegedly refused to move and resisted being handcuffed, the New York Post reports.

As officers wrestled one man to the ground and cuffed him, passersby gathered around the scene. One officer, whom police sources identified as officer Francisco Garcia, demanded the bystanders leave the scene, brandishing a Taser and yelling, “move the f*ck back right now!”

Garcia briefly holsters his Taser, only to grab a pedestrian—identified by police and the Post as Donni Wright—and hurl him to the ground. Garcia repeatedly slaps and punches Wright in the head and drags him across the street, kneeling on his head as he and another officer handcuff him.

Police reportedly arrested Wright and two others who were part of the group standing outside the corner store. According to the NYPD and the Post, Garcia “felt threatened when Wright struck a fighting stance.”

The video of the scuffle has gone viral on social media. Criminal defense and civil rights attorney Rebecca Kavanagh shared the video on Twitter, where it has been viewed more than 290,000 times. Several other prominent Twitter and Instagram accounts reposted the video as well, with many users demanding that Garcia be suspended or fired.

The video of Wright’s arrest painted a vastly different picture than recent photos of NYPD police handing out face masks to (predominantly white) New Yorkers who were social distancing at Hudson River Park over the weekend.

Garcia will reportedly be placed on modified duty until he can be probed by the NYPD’s Internal Affairs Bureau, which New York City Mayor Bill de Blasio confirmed on Twitter.

“Saw the video from the Lower East Side and was really disturbed by it,” de Blasio wrote. “The officer involved has been placed on modified duty and an investigation has begun. The behavior I saw in that video is simply not acceptable.”