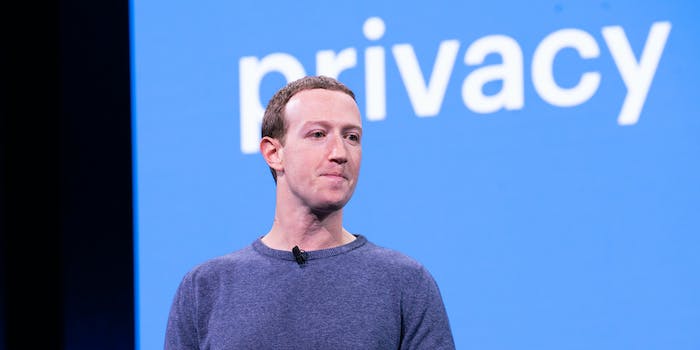 Zuckerberg's info was included in the dataset.

Over the weekend, Insider reported that a cache of personal information for more than 533 million Facebook users was published on a low-level hacking forum and made available for free. The data includes phone numbers, Facebook IDs, names, locations, birthdays, bios, and email addresses for some users, according to the news outlet.

Motherboard reported earlier this year that access to the database was being sold on a low-level cybersecurity forum and people were able to use an automated bot to look up numbers.

A spokesperson for the social media giant told Insider that the data was scraped due to a vulnerability that was patched in 2019. But that kind of information available, for free online, can cause security and privacy issues for affected users.

While Facebook users are likely trying to figure out if they are among the half-a-billion people affected by the data breach being made public, researchers have noticed that Zuckerberg’s information is part of the breach.

Dave Walker, a security researchers, tweeted about Zuckerberg being part of the breach on Saturday.

“Regarding the #FacebookLeak, of the 533M people in the leak – the irony is that Mark Zuckerberg is regrettably included in the leak as well,” Walker tweeted.

Bleeping Computer also noticed Zuckerberg being part of the data leak and credited Walker with tipping them off. Bleeping Computer added that personal information for other Facebook founders Chris Hughes and Dustin Moskovitz were also in the cache.

If you want to see if your personal information is part of the cache, HaveIBeenPwned?, a free reliable service that alerts you if you’ve been part of major data breaches, has added it to its search.

The search only includes email addresses for now. However, Troy Hunt, creator of HaveIBeenPwned, tweeted on Sunday that phone numbers being added to the search is being considered.