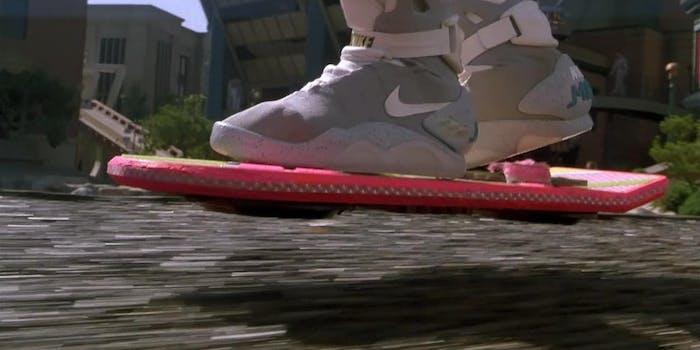 Hoverboards are barely even a thing—one of the most jaw-dropping pieces of hoverboard footage ended up being nothing more than a prank, unfortunately—but that didn’t stop one brave man from prototyping his own, and then going on to set a Guinness World Record for longest hoverboard journey.

Built by Catalin Alexandru Duru of Canada, the one-of-a-kind craft set the record on Quebec’s Lake Ouareau, where Alexandru Duru traveled an impressive 275.9 meters in the air before touching down in the water. He needed to travel just 50 meters to take the title, and he absolutely shattered it.

Like an aerial drone, this record-setting hoverboard uses downward-facing propellers to offset the rider’s weight and allow them to float effortlessly. It’s a lot like a quadcopter, except much more powerful.

It’s also a much more capable design than some other hoverboard prototypes. Since it relies only on its own mechanical energy for flight, it can be used virtually anywhere, and is not limited in the way magnetic or sonic levetation-based boards can be.

But perhaps the most remarkable thing about the board’s impressive feat is just how stable it appears to be. Of course, Alexandru Duru built the beast himself, so he has plenty of practice, and anyone else setting foot on it would likely pull off nothing more than a gnarly faceplant.

Image via Back to the Future/Universal Pictures