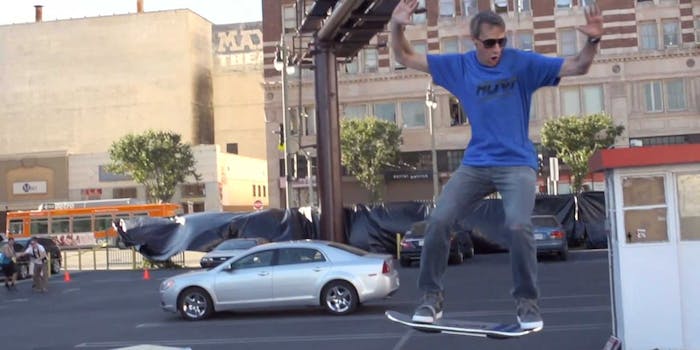 Funny or Die is behind that viral hoverboard video

First there was the Tumblr that disseminated false Back to the Future trivia every single day, and now this: videos from some outfit called HUVr Tech, which claims to have invented an honest-to-goodness hoverboard. Also, there is nothing left of this world to believe in.

Nobody who watched these spots—featuring Tony Hawk, Moby, Terrell Owens, and Doc Brown himself, Christopher Lloyd—could have thought they depicted reality. If you did, it’s best you keep that to yourself. But we’re left with the question of why anyone would bother.

Update: Here’s the answer: It’s a Funny or Die sketch.

The celebrities involved in the perplexing stunt (Mark Cuban, Billy Zane, Schoolboy Q, and the bands Chromeo and Best Coast among them) did their part to hype it on social media.

still can’t believe i got to ride this with @tonyhawk @HUVrTech https://t.co/w0aa21r1rw https://t.co/DM15bJvmOY a really amazing day.

The future is tomorrow. pic.twitter.com/gDuDAeEywX

As Matt Novak points out at Paleofuture, the anti-gravity physics involved are too complex. One of the HUVr Tech website’s featured MIT scientists is an actor. Also, the suspiciously brand-new company wasn’t responding to press inquiries, which gave a hint that something was being advertised here. A visual effects company? A Deloreans-only car dealership? Nah, just a comedy network.

The promise of a Back to the Future reboot would have been a more efficient way to stab franchise fans in the heart than a hoverboard hoax that targets the most depressingly gullible.

You know which science-fiction device I would love to have in my hands right now? That flashy little thing from Men in Black that erases your memory.