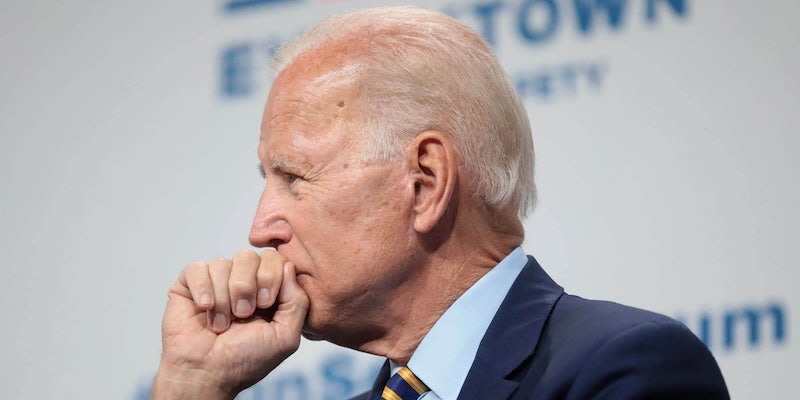 Has anyone seen Joe Biden recently? Anyone?

Twitter users are asking where former Vice President Joe Biden is and are even suggesting that the Democratic presidential candidate could have the coronavirus (COVID-19).

Since his primary victories last Tuesday, and a disastrous virtual town hall the Saturday prior, Biden has seemingly fallen off the map as the coronavirus pandemic furthers its spread in the U.S.

Even as both President Donald Trump and Biden’s fellow candidate Sen. Bernie Sanders (I-Vt.) regularly address the public regarding the pandemic, the former vice president has remained missing in action.

Political analysts argue that Biden is failing to show true leadership as Americans and the world at large look for answers amid the ongoing health crisis.

Current Affairs editor Nathan J. Robinson has even gone as far as to pen an op-ed calling Biden’s behavior inexcusable.

“Joe Biden has failed completely at a critically important test of his leadership,” Robinson tweeted. “During an unprecedented national crisis, he has gone AWOL. There is no excuse for it.”

Biden’s campaign seems well aware of the questions. But those questions only intensified on Saturday evening when Symone D. Sanders, Biden’s senior advisor, claimed the candidate left a thumbs up emoji inside a popular Instagram live stream.

Twitter users found it hard to envision Biden, and not a campaign employee, actually navigating through Instagram to join a virtual party.

For what it’s worth, Biden is supposed to start giving daily briefings as early as Monday. If that’s the case, it will likely remove any questions about Biden’s current state.

Biden had stated on Friday that he was “desperately” trying to find a way to communicate with Americans remotely, leading many to ponder the candidate’s understanding of technology.

But if Biden fails to show this week, speculation will undoubtedly intensify. And questions about Biden’s whereabouts appear to have made their way outside of Twitter as well.

“My partner’s liberal parents who are in their late sixties and don’t use social media have noticed that Biden is nowhere to be found and independently suggested he may have coronavirus,” user @meaganmday added. “This isn’t just a Twitter meme, people really want to know: Where the hell is Joe?!”

Biden’s Twitter page unsurprisingly has also been bombarded by users curious about his status.

So is it odd that Biden has been so distant during an unprecedented global pandemic? Arguably yes. Does that mean Biden has the coronavirus and is secretly hiding? There is zero evidence whatsoever to suggest that is the case.