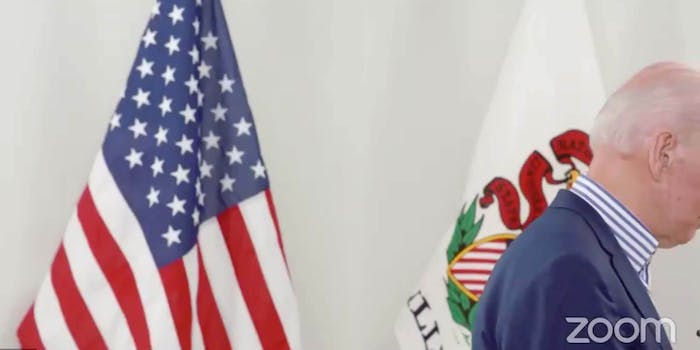 At one point the former vice president even wandered off camera.

The meeting, held over the Zoom video conferencing app, aimed at allowing the former vice president to speak to Illinois voters after his campaign cancelled his Chicago rally.

But the digital discussion was plagued not only by technical difficulties but also by awkward moments.

The issues first began before the meeting even started when the campaign pushed back the original start time by two hours. After an additional hour or so delay, the meeting finally began.

When Biden appeared, however, the stream quality was lagging significantly. Viewers reported choppy video and audio, making the candidate unintelligible. Even when the stream was rebooted, issues remained.

Even in the moments where the stream was working for some, Biden, who went on to take questions from viewers, wandered out of frame awkwardly. The campaign responded by replacing the stream with the candidate’s logo.

“I don’t think the issue with this is a technical glitch,” Twitter user @jackallisonLOL said.

But not everyone was laughing at the incident. Symone D. Sanders, a senior adviser to Biden, pushed back on coverage of the town hall and accused the New York Times specifically of aiding Trump.

“The paper is working over time to make Trump sound coherent,” she said. “We are in the middle of a pandemic & he has bungled the response, but please drag us for our video conferencing software. Priorities right?”

Still, Twitter users couldn’t help but poke fun at the candidate, who has become the subject of memes and other jokes due to his frequent gaffes as well.

“In a bizarre, meandering livestream put on by Joe Biden’s campaign today, he forgets what year it is and when, if he doesn’t lose, he would be in office,” @JordanUhl noted.

Despite the mess, we will undoubtedly see more virtual town halls in the coming weeks as the coronavirus continues its spread. We can only hope that Biden and his team work out the kinks before then.