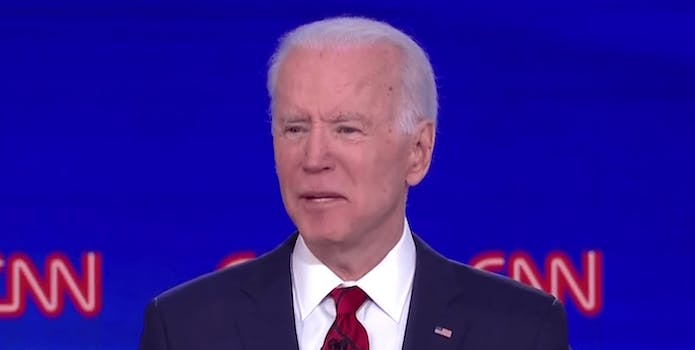 Where in the world was Joe Biden going with this Jack the Ripper analogy?

Jack the Ripper... what?

The debate also was the first since the coronavirus outbreak was upgraded to a global pandemic, and the first portion of the evening covered how the two candidates would handle the American response.

But even millions of Americans being at risk of illness couldn’t stop the debate from devolving into the same tired tropes that have been hashed and rehashed over the past year.

Toward the end of the debate, ahead of Tuesday’s Florida primary, Sanders was challenged on previous comments where he praised Fidel Castro’s literacy programs.

The conversation then pivoted to China, which Sanders criticized for its authoritarianism. But he also noted the nation’s success with bringing citizens out of poverty.

Biden brought up the Chinese’s brutal oppression of the Uighur Muslim minority.

“Did China make progress in ending extreme poverty over the past 50 years?” Sanders asked Biden.

“That’s like saying Jack the Ripper,” Biden said, but he didn’t finish his thought.

Biden does have a tendency to give up on thoughts in the middle of debates. He also has been criticized as being old and out of touch, and his reference to a famous murderer in the 1880s probably doesn’t help.

It also didn’t help that Biden didn’t finish the sentence.

That’s like saying Jack the Ripper… what? Was a terrible doctor?

In all likelihood, Biden was going to say “that’s like saying Jack the Ripper” cleaned up the streets, implying that Sanders was justifying brutality in the face of modest progress.

But there was never really a professed motive for Jack the Ripper’s murders, as no suspect was ever caught.

In reality, Biden may have been mixing up his serial killers.

Peter Sutcliffe, aka The Yorkshire Ripper, terrorized Northern England in the 1970s when Biden was in Congress and said he killed women because he wanted to “clean up the streets.”

Sometimes you mix up your Rippers in the middle of a primary debate in the midst of a pandemic.

Honestly, who hasn’t experienced that?