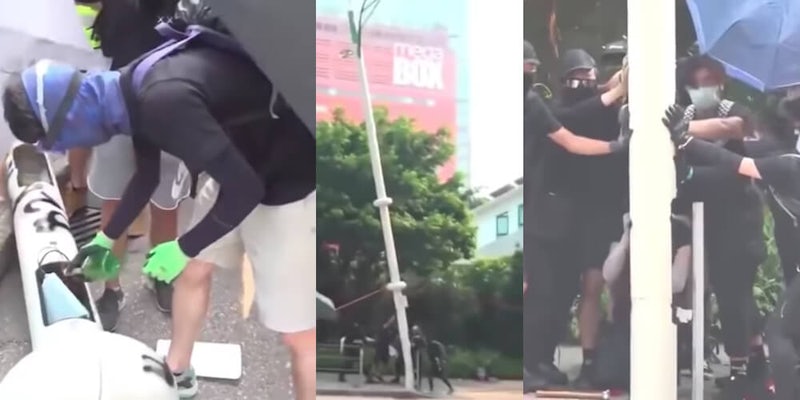 Local authorities claim the devices are only collecting data on air quality, weather, and traffic.

Protesters in Hong Kong destroyed a “smart” lamppost on Saturday over fears that the device is equipped with facial recognition software and was being used for surveillance.

Video of the incident shows the base of the lamppost being cut with an electric saw before protesters use ropes to topple the device. Once the lamppost is on the ground, one protester proceeds to pour liquid into the device, presumably to ensure it no longer works.

Local authorities have claimed that the lampposts, which are outfitted with cameras and sensors, are only collecting data on air quality, weather, and traffic. Yet, protesters at the scene, who carried umbrellas in order to hide their faces, have raised concerns that the new lampposts were really intended to monitor the public.

“This isn’t a street light. This is a ‘smart’ lamppost equipped with cameras and facial recognition technology,” one Twitter user alleges. “They enable monitoring of Hong Kong, and therefore monitoring of protests. So the protesters are bringing them down.”

This isn’t a street light.

This is a “smart” lamppost equipped with cameras and facial recognition technology.

So the protesters are bringing them down.

Roughly 50 lampposts have reportedly been placed throughout the city so far, and as many as 400 more are expected to be installed in the near future.

The Hong Kong protests first began more than two months ago in opposition to a proposed Chinese extradition law that has since been suspended. Protesters are now fighting for democracy by demanding free elections, an inquiry into allegations of police brutality, and removal of all smart lampposts.

Violence also broke out this weekend between protesters and police after a more than a two-week period of relative calmness.

Tensions escalated even further on Sunday after one officer fired live ammunition into the air and others used water cannons against protesters.

Concerns have also been raised over the possibility that mainland Chinese troops could be sent in to restore peace, although police in Hong Kong have denied that such a plan exists.