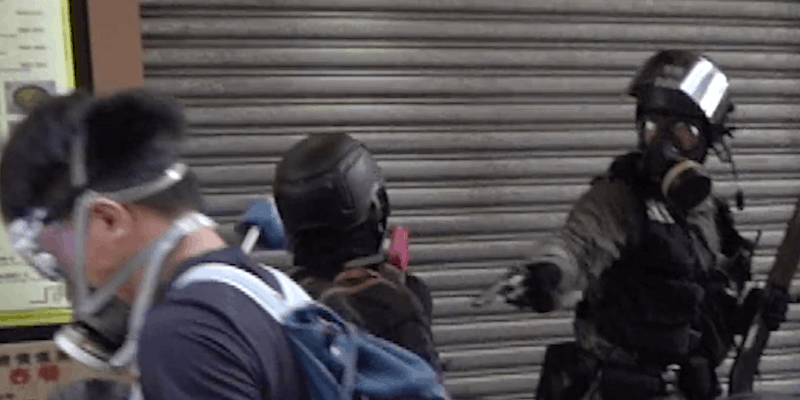 The teen is in critical condition.

A Hong Kong police officer shot 18-year-old protester Tsang Chi-kin at point-blank range in the chest on Tuesday, as protests continue to ring out the 70th anniversary of communist China.

Hong Kong protesters have been rallying for democracy for 17 weeks now. The shooting is so far the most dire violence to spawn out of the protests, in which no one has died.

A Facebook video captured the moment a police officer shot Chi-kin, merely standing a few feet away from him. The teen is now in critical condition, according to the South China Morning Post.

“A large group of rioters were attacking police officers,” a police spokesperson said in the video. “Despite warnings from the police, the assailants still continued the violent attacks. The police officers’ lives were under serious threat. He fired a live shot at the assailant.”

In the video, the teen approaches the officer with an object before a gun is fired. The protester then stumbles back and falls over.

Chinese media outlets report that during the time the teen was shot, there were clashes between protesters and police in at least 13 other parts of Hong Kong. According to BuzzFeed News, police used tear gas and water cannons with burning chemicals while protesters threw Molotov cocktails and bricks.

In a statement, per multiple outlets, police chief Stephen Lo said Tuesday was “one of Hong Kong’s most violent and chaotic days.” The South China Morning Post says 66 individuals are injured and two others remain in critical condition.

“As celebrations start in Beijing to mark the 70th anniversary of the founding of Communist China, pro-democracy protesters begin to rally in Hong Kong. By 8am pepper-spray was already being used. Local officials have had to move a flag-raising ceremony behind closed doors,” AFP news agency tweeted.

As celebrations start in Beijing to mark the 70th anniversary of the founding of Communist China, pro-democracy protesters begin to rally in Hong Kong. By 8am pepper-spray was already being used.

Local officials have had to move a flag-raising ceremony behind closed doors pic.twitter.com/p3oK6UjmVq

Hong Kong is an administrative region of China that acts and governs like a separate country. The pro-democracy protests began after an extradition bill was proposed by mainland China. The protest evolved from the now-dead bill into demands for democracy. Reparations for police actions have also been at the root of the protests.

“Here we must warn again: All rioters must stop all illegal acts. Police will continue to enforce the law seriously,” the police spokesperson says in the video.