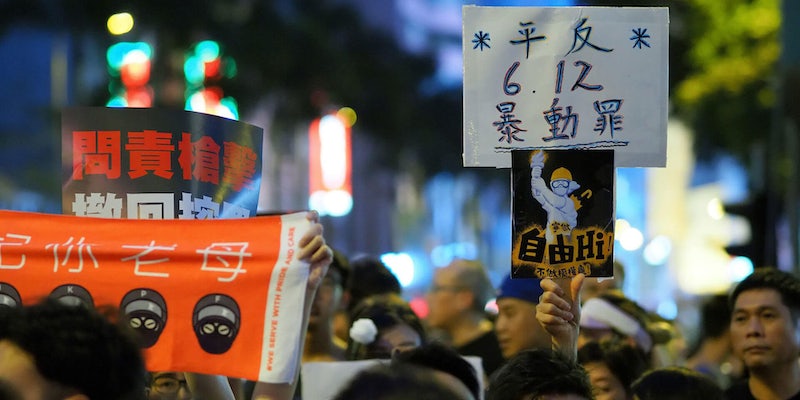 A mysterious website is doxing Hong Kong protesters and journalists

One protester has already been attacked outside of his home as a result.

Protesters, journalists, and pro-democracy lawmakers in Hong Kong are being doxed by a mysterious website, BuzzFeed News reports.

The site, which lists everything from names, phone numbers, and home addresses, has already resulted in one protester being attacked outside of his home. That protester, 19-year-old Isaac Cheng, was punched in the face several times by three men in early September.

Cheng, the vice-chair of pro-democracy organization Demosisto, says the attack came just days after his information appeared online. Prior to the attack, Cheng says his phone became nearly unusable after being flooded with calls by people who saw his number posted on the mysterious site.

“This is their strategy to use scare tactics to make Hong Kong people give up their freedoms,” Cheng said. “Feeling fear will restrict your freedom.”

Although that website was eventually taken down, a new site has sprung up in its place, hosting even more private information on pro-democracy Hong Kong residents than before.

The website is hosted on a Russian server as well, making it difficult for the content to be taken down. Links to the site are regularly spread on social media by what BuzzFeed News describes as accounts not appearing genuine.

To make matters worse, a Chinese state media outlet reported on the site and encouraged its followers on Weibo–a Chinese social media platform–to spread its post.

While it remains unclear who is behind the site, many suspect both the Chinese government and nationalists in Hong Kong and on the mainland.

Doxing has become such an issue that a Hong Kong court issued an injunction on Thursday in an attempt to stop the site from publishing journalist’s private information.

The protest in Hong Kong erupted in June in opposition to an extradition bill that has since been withdrawn. Protesters are now issuing new demands in an attempt to keep Hong Kong semi-autonomous amid attempts by Beijing to exert more control over the territory.