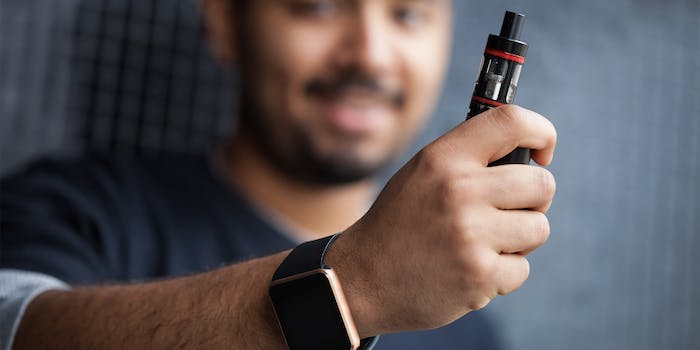 The move comes as the federal government is expected to announce new rules surrounding vaping.

Apple is removing nearly 200 vaping apps from its app store, citing an illness linked to some forms of vaping, according to a new report.

Axios reports that Apple is removing 181 apps from its mobile app store. The apps don’t allow the sale of vaping cartridges, but many of them allowed vapers to control settings and lights on their devices.

People who already have the apps on their iPhone can still use it and also install it on new devices, according to the report. Apple had stopped accepting new vaping-related apps earlier this year.

“Recently, experts ranging from the CDC to the American Heart Association have attributed a variety of lung injuries and fatalities to e-cigarette and vaping products, going so far as to call the spread of these devices a public health crisis and a youth epidemic,” the company told Axios in a statement. “We agree, and we’ve updated our App Store Review Guidelines to reflect that apps encouraging or facilitating the use of these products are not permitted. As of today, these apps are no longer available to download.”

The move from Apple comes as the federal government is readying a policy surrounding vaping and e-cigarettes.

In September, the Trump administration announced that it was working on a policy that would ban the sale of all non-tobacco flavored e-cigarette products. However, it appears that the policy will not quite go that far. There may also be a distinction between vapes and e-cigarettes in the policy.

The proposed policy has faced intense push back from vapers.

President Donald Trump said earlier this week that he was meeting with the vaping industry, adding “health and safety” and “jobs” would be a focus of the conversation.