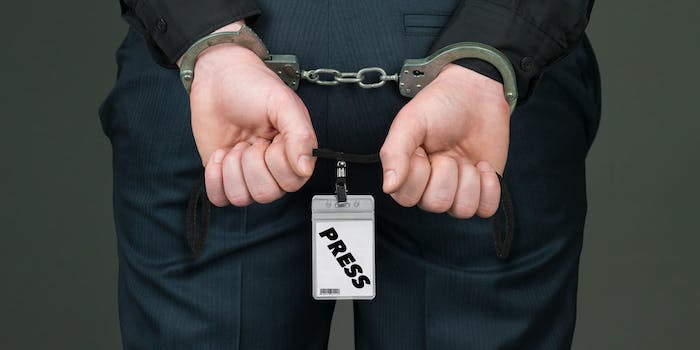 The United States might guarantee freedom of the press in the constitution, but that hasn’t stopped dozens of journalists from seeing those protections violated in recent months.

Those transgressions are coming at a rapid pace as the public perception of journalism continues to be warped by the highest levels of government.

A group of press advocacy organizations are hoping to shed light on the number of press freedom violations in the country with the “U.S. Press Freedom Tracker,” a one-stop shop that will document journalists who have been arrested, had their electronics searched, and more.

“This project… has been in the works for quite some time now, since the beginning of the year,” said Alex Ellerbeck, a senior Americas and U.S. research associate at the Committee to Protect Journalists. “We’re trying to get as much information as possible and create a reliable central repository for information, which is something that doesn’t currently exist.”

The website, which launches today, was developed by a team of organizations including the Committee to Protect Journalists (CPJ), the Freedom of the Press Foundation, the Knight First Amendment Institute at Columbia University, the Reporters Committee for Freedom of the Press, Reporters Without Borders, and the Index on Censorship, among others.

The need for a website tracking all of these violations, which occur nearly every week, was necessary, organizers said. Indeed President Donald Trump has repeatedly railed against the press as “dishonest,” “fake news,” and “the enemy of the American people,” and that rhetoric is beginning to show real-world consequences.

In just the past few months, journalists have been arrested for asking questions, arrested while reporting on protests, pinned against a wall, physically attacked by government officials, and even had jokes about shooting them made at their expense.

‘It’s based on facts’

The website will offer anyone interested in seeing data on these violations a chance to dig deeper, organizers said. Through different filters, visitors of the site can see censorship by government entities, arrests, detentions, criminal charges, denial of access, chilling statements, subpoenas and legal orders about journalistic work, journalists being stopped at the border, and a host of other violations.

“It’s based on facts, which are increasingly in short supply in our dialogue about journalism,” said Kathleen Carroll, the chair of CPJ’s Board of Directors. “It’s important that we not over inflate nor under count the things that are happening to journalists in the United States, and the Press Freedom Tracker will give us facts.”

The $50,000 that Rep. Greg Gianforte (R-Mont.) donated to the Committee to Protect Journalists—following his attack on Guardian reporter Ben Jacobs earlier this summer—was used to fund the U.S. Press Freedom Tracker.

Ultimately, organizers said, the data collected will help the different groups involved continue their advocacy, journalism, and legal action. Ellerbeck said she also hopes journalists will use the site to report on press freedom incidents or tip the organizers about things they’ve seen or heard.

Peter Sterne, a former media reporter at Politico and now a reporter for Freedom of the Press Foundation, said the database structure of the website was important for people to be able to see just how many violations have occurred.

“We built this site to make it very easy, not only to see these cases, but to see similar cases, and see trends,” he said.

The database has information roughly starting at the beginning of the year, but organizers said they hope people will be able to download the data and make their own statistical conclusions in the future.

“This provides context,” Sterne said. “I think we all know journalists get arrested, especially during protests… but I don’t think that people have a sense of the scale. You don’t know how many times it happens because until now, you’ve really had to look one by one. This just is a database that pulls everything together.”