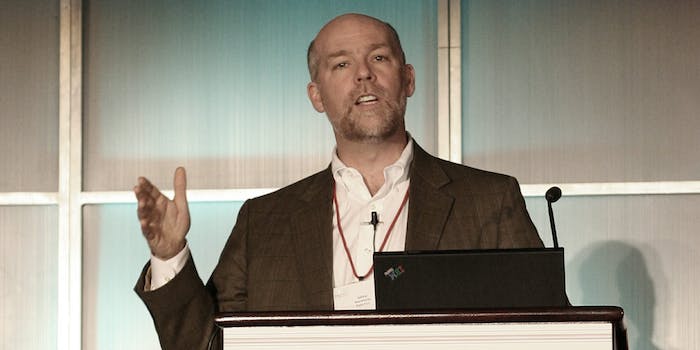 Republican candidate for Congress charged with assault after ‘body-slamming’ reporter

Greg Gianforte, the Republican candidate for Montana’s open congressional seat, faces misdemeanor assault charges after he allegedly body-slammed, wrung the neck of, and punched a reporter on Wednesday, one day before Montana’s special election.

According to eyewitness accounts from reporters across multiple outlets, the Guardian’s Ben Jacobs approached Gianforte during preparations for another interview for Special Report with Bret Baier and asked him about his response to the new Congressional Budget Office report on the American Health Care Act.

According to audio from the incident, Gianforte said they’d speak later, but Jacobs insisted there was no time. That’s when Jacobs said Gianforte “body-slammed” him. In the audio, a crash can be heard, followed by Gianforte yelling, “I’m sick and tired of you guys … Get the hell out of here.”

“He took me to the ground,” Jacobs told the Guardian by phone from the back of an ambulance. “I think he wailed on me once or twice … He got on me and I think he hit me … This is the strangest thing that has ever happened to me in reporting on politics.”

Greg Gianforte just body slammed me and broke my glasses

According to Fox News’s Alicia Acuna, who had witnessed the attack along with other Fox personnel, Gianforte “grabbed Jacobs by the neck with both hands and slammed him into the ground behind him.”

“Faith, Keith and I watched in disbelief as Gianforte then began punching the reporter. As Gianforte moved on top of Jacobs, he began yelling something to the effect of, ‘I’m sick and tired of this!'” Acuna wrote. “Gianforte looked at the three of us and repeatedly apologized. At that point, I told him and [press person Sean] Scanlon, who was now present, that we needed a moment. The men then left.”

BuzzFeed News reporter Alexis Levinson tweeted the sequence of events after she saw them. While she couldn’t physically see the entire scene, she described what she witnessed from outside the room.

I can't quite remember the order but the next few things were someone slamming the door, Gianforte's Spox walking into the room,

The aide came over and told him he had to leave

According to Scanlon, however, Jacobs’s confrontation and the subsequent attack happened in a completely different manner, with Jacobs “aggressively shoving” a recorder into Gianforte’s face and grabbing the candidate’s wrist, resulting in the men both being pushed to the ground. Here’s the full statement, according to CNN:

“Tonight, as Greg was giving a separate interview in a private office, The Guardian’s Ben Jacobs entered the office without permission, aggressively shoved a recorder in Greg’s face, and began asking badgering questions. Jacobs was asked to leave. After asking Jacobs to lower the recorder, Jacobs declined. Greg then attempted to grab the phone that was pushed in his face. Jacobs grabbed Greg’s wrist, and spun away from Greg, pushing them both to the ground. It’s unfortunate that this aggressive behavior from a liberal journalist created this scene at our campaign volunteer BBQ.”

Acuna disputes this in her piece, clarifying that she and the other Fox journalists saw no “physical aggression” from Jacobs toward Gianforte.

Gianforte, who just yesterday tweeted that he had been endorsed by three large Montana newspapers, appears to have lost two newspaper endorsements as a result of the assault

What an incredible honor to be endorsed by three of MT’s biggest
newspapers. Thank you @missoulian @billingsgazette @helenaironline pic.twitter.com/iW5UEORGgm

As of Tuesday, more than 250,000 special election ballots had been mailed, according to CNN.

Jacobs reported the incident to the police, who charged Gianforte with misdemeanor assault. According to Gallatin County sheriff Brian Gootin, Gianforte received a citation on Wednesday night, and is scheduled to appear in court between now and June 7.