They don't want to run on issues.

Heading into the 2018 midterms, where pundits have predicted a wave of Democratic victories thanks to the GOP’s unpopular policies and lack of legislation—Republicans have settled on a new target: civility.

And they are going all in.

The debate exploded this week after Trump officials were met with protests at restaurants, and Rep. Maxine Waters (D-Calif.) called for administration members to be met with resistance wherever they go.

Yesterday, the GOP launched an attack ad going after Democrats for some of their most egregious instances of discourse against the president.

It mixes Water’s call for officials to be met with vocal criticism when they go out in public with celebrity lowlights of the past two years: Kathy Griffin, Johnny Depp, and Madonna all alluding to an assassination. Those are intertwined with comments made by comedians Michelle Wolf, Samantha Bee, and Snoop Dogg attempting to blur the lines of what is true criticism is and can be.

The video doubles down on calls from Republicans in the last few days that Democrats were somehow misbehaving at politics.

Trump himself latched on to the “unhinged” phrase this morning on Twitter.

Congratulations to Maxine Waters, whose crazy rants have made her, together with Nancy Pelosi, the unhinged FACE of the Democrat Party. Together, they will Make America Weak Again! But have no fear, America is now stronger than ever before, and I’m not going anywhere!

In a tweet from last night, as primary results rolled in, Trump blamed Rep. Joe Crowley’s (D-N.Y.) stunning loss on not being nice to him.

Wow! Big Trump Hater Congressman Joe Crowley, who many expected was going to take Nancy Pelosi’s place, just LOST his primary election. In other words, he’s out! That is a big one that nobody saw happening. Perhaps he should have been nicer, and more respectful, to his President!

Yesterday, the president’s reelection committee put out a fundraising email that tried to capitalize on moments of liberal resistance, asking for money to fight, with the subject line: “Harassment. It has to end.” 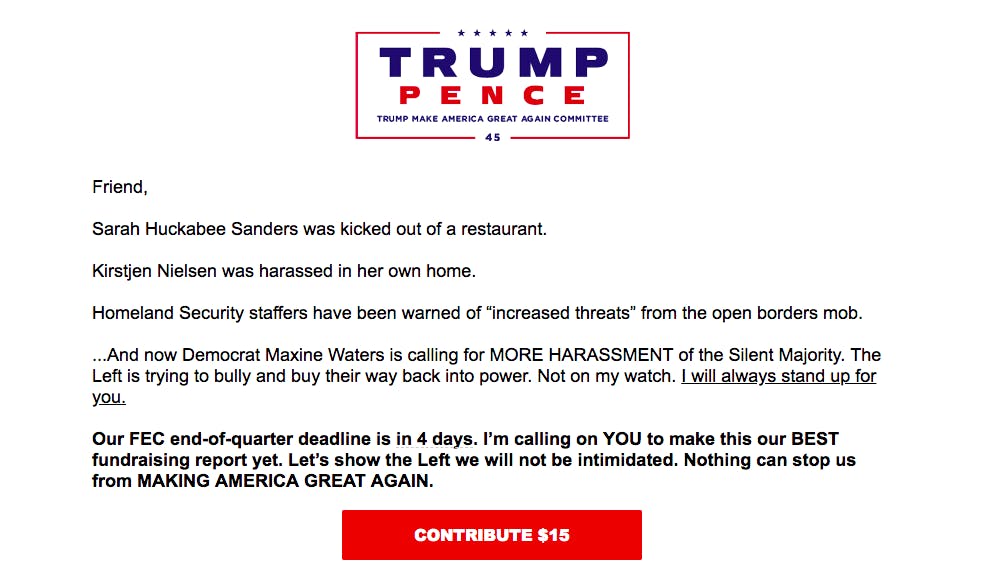 The president’s son, who has claimed he wants to be a big part of the 2018 midterms, loved the “unhinged” ad.

It quickly picked up steam with other conservative figureheads this morning.

The left has no choice but to show us who they really are. They are desperate disgusting lunatics, who will stop at nothing to take over AMERICA. This is the left in 2018. They are unhinged. Vote RED Now and FOREVER. @MAGApreneur @realDonaldTrump @MAGA @KAG pic.twitter.com/5bsBPg4alt

While the response to Trump from Democrats has been one of protest and resistance, the civility debate being made by Republicans is as hollow as their promises to replace Obamacare.

Conservatives rallying over the years has led to the murder of abortion doctors, protests where Obama dolls were lynched, and attacks on protesters at Trump rallies.

Then there is the president’s own use of language, which is anything but hinged.