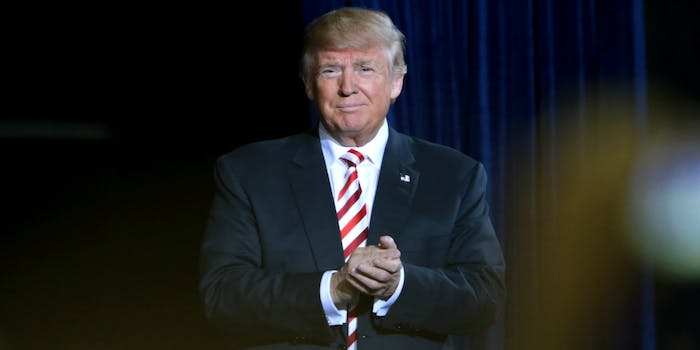 President Donald Trump retweeted a conspiracy theory on Saturday, breathing life into the claim that former President Bill Clinton had something to do with accused sex trafficker Jeffrey Epstein’s death.

Epstein was found dead in his federal prison cell from an apparent suicide on Saturday morning.

The tweet in question, written by conservative commentator Terrence K. Williams, read, “Died of SUICIDE on 24/7 watch? Yeah right! How does that happen #JefferyEpstein had information on Bill Clinton & now he’s dead.”

The tweet also included a two-minute video, featuring himself, in which Williams explains how he believes the Clintons are involved in the death.

The video, which was taken selfie-style, also ties the suicide to the late White House aide Vince Foster’s suicide in 1993. He says the circumstances surrounding both the deaths are linked to the Clintons. Foster’s suicide being staged is something that Trump has suggested he believed during his 2016 presidential campaign.

There is no evidence at all to support the claims made by Williams in the video.

Actually, there’s no evidence to back any of the conspiracy theories that have been making their rounds since the Epstein’s death was first reported.

Some say the suicide was fake and that Epstein is still very much alive, while others believe powerful people–like the Clinton’s or even Trump, himself–had something to do with his death since Epstein allegedly knew so much about their own wrongdoings.

And, as for the sitting president, making these sort of outlandish claims about former presidents is not new either. Trump, in the past, has breathed life into the “birther” conspiracy theory regarding former President Barack Obama’s citizenship.

Hundreds of court documents became unsealed on Friday, which claimed new accusations of sexual abuse against Epstein. He had a tentative trial date set for next year.