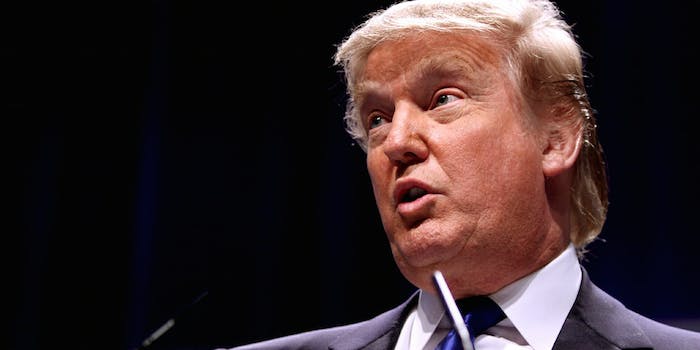 The Republican presidential candidate mocked anyone who would take issue with his plan.

Hours after Donald Trump suggested the U.S. ban Muslims from entering the United States, the leading Republican presidential candidate said America should also consider “closing the Internet up in some way” to fight Islamic State terrorists in cyberspace.

Trump mocked anyone who would object that his plan might violate the freedom of speech, saying “these are foolish people, we have a lot of foolish people.”

“We have to go see Bill Gates,” Trump said, to better understand the Internet and then possibly “close it up.”

Trump characterized the problem of Internet extremism by saying, “We’re losing a lot of people because of the Internet.”

The Internet has taken center stage in both the 2016 presidential race and the Obama administration’s current fight against ISIS. Democratic candidate Hillary Clinton urged tech companies to “deny online space” to terrorists. Clinton then anticipated and waved away presumed First Amendment criticisms.

“We’re going to hear all the usual complaints,” she said on Monday, “you know, freedom of speech, et cetera. But if we truly are in a war against terrorism and we are truly looking for ways to shut off their funding, shut off the flow of foreign fighters, then we’ve got to shut off their means of communicating. It’s more complicated with some of what they do on encrypted apps, and I’m well aware of that, and that requires even more thinking about how to do it.”

The Obama administration spoke about cyberspace in a Sunday night speech from the Oval Office. The president said he would “urge high-tech and law enforcement leaders to make it harder to use technology to escape from justice.”

While less explicit and extreme a statement than Trump’s, many observers took Obama’s statement to be about outlawing strong encryption.

Here’s Trump’s complete statement on his proposal to crack down on the Internet due to ISIS:

And we have our anchors—I think I’ve got ’em mostly stopped, have you noticed that, they don’t say it as much—but they say, the ‘young mastermind’, oh he’s brilliant. I don’t think he’s got a high IQ. In Paris, I called him the guy with the dirty, filthy hat. ‘K? Not a smart guy, a dummy. A mastermind? Bing bing bing, starts shooting everybody.

The press has to be responsible; they’re not being responsible. We’re losing a lot of people because of the Internet. We have to see Bill Gates and a lot of different people who really understand what’s happening and maybe, in some ways, closing that Internet up in some ways.

‘Where were you?’ ‘I was fighting for ISIS.’ ‘Oh, come on back. Go home, enjoy yourself.’ When they leave our country and they go to fight or go to ISIS, they never can come back.

Update 10:33pm CT, Dec. 7: Added complete quote of Donald Trump’s statement on the Internet and theoretical ISIS recruits who return to the U.S.