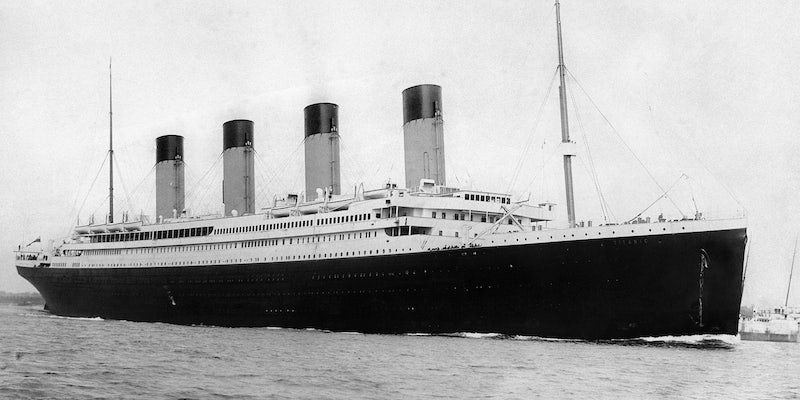 Did it have to do with the Federal Reserve?

The sinking of the RMS Titanic on Apr. 15, 1912, was one of the most traumatic events of the pre-World War I Western world. It involved a ship that nobody believed could go down sinking on its first voyage after an incident that it should have survived, causing a massive loss of life. And it sparked a Titanic conspiracy theory industry, that somehow hasn’t died to this day.

From the beginning, there were questions about how this could have happened. The disaster was simply unthinkable. And when something truly unthinkable happens anyway, conspiracy theories arise to explain it away. The questions that were asked in the wake of the ship’s sinking haven’t gone away, even though we’ve known the basics of what happened since shortly after the accident.

A hundred years has spawned a Titanic conspiracy theory field, with people alleging that the sinking wasn’t the result of the ship going too fast through a field of icebergs, but a deliberate attempt to fool the public, assassinate various passengers, or part of a complex insurance scam by Titanic’s builder: the White Star Line. They’re also the inevitable result of a shocked populace trying to make sense out of what was the worst maritime disaster in history.

What is the Titanic conspiracy theory?

What is the established version of the Titanic’s sinking?

Despite having received six warnings of sea ice on her route to New York, the ship was traveling near her maximum speed when she entered an area called “Iceberg Alley.” With no moon and little giving away the icebergs’ positions, the ship’s lookouts didn’t see an iceberg until it was too close.

Unable to turn quickly enough, the ship was scraped by an iceberg that gashed her starboard side, flooding six compartments, including two boiler rooms. Though the ship has been billed as “unsinkable,” the crew realized the damage control measures were inadequate and the ship was doomed.

Within two hours, she had gone down. Because it didn’t have enough lifeboats, the crew wasn’t well-trained in emergency procedures, and many passengers believed the alarms going off were a prank or exercise, 1,514 of the 2,220 people on board died.

31.6% – the percentage of people aboard the #Titanic (passengers and crew) who survived the sinking.

53.4% – the total percentage who could have survived, given the number of spaces available on the lifeboats.

What is the “Olympic Switch Theory?”

This conspiracy theory holds that it wasn’t the Titanic that sunk on its maiden voyage from England to New York, but a different ship owned by White Star Line—the RMS Olympic. The Olympic had been damaged while sailing from Southampton, England to New York about six months before the Titanic went down, necessitating extensive repairs. As the conspiracy theory goes, the Olympic was badly damaged, and a lawsuit against the cruise line meant the repairs wouldn’t be covered by insurance.

But the two ships were not identical, and in fact, had dozens of major differences in their design, layout, and configuration

If Titanic really had actually been the damaged Olympic, one of the many expeditions to the wreck would have noticed it almost right away. The Titanic’s hull number, 401, is visible all over the wreck; and the damage to the Olympic wasn’t all that extensive —costing about $200,000 (about $5.2 million today) to fix.

In contrast, Titanic was massively underinsured, causing White Star line to take a hit of over $4 million ($105 million today) when it went down. Olympic was actually sailing back from New York when Titanic went down, and was one of the first ships to arrive at her wreck. It would continue making trans-Atlantic trips until she was retired in 1935.

Did the Titanic’s sinking lead to the Federal Reserve being started?

The founding of the American central bank the Federal Reserve has spawned a legion of conspiracy theories. The fact that it took place just a year after the Titanic sank has led to the doomed ship being pulled into some of these theories. Central banking was a very controversial topic at the time, and the maiden voyage of the Titanic had three of the wealthiest Americans living at the time: John Jacob Astor IV, Benjamin Guggenheim, and Isidor Straus. That’s easy enough to see why a Titanic conspiracy theory could crop up.

As the theory goes, these men were the most high-profile opponents of the Federal Reserve, but their deaths would clear the way for the bank’s creation.

So they were murdered in a purposeful sinking organized and planned by J.P. Morgan, the wealthy industrialist who held a significant ownership share of White Star Line and played a critical role in launching the Federal Reserve. The plot was so dastardly that Morgan himself canceled his booking on the Titanic at the last minute, making him look like a recipient of great luck, rather than the organizer of a conspiracy to commit mass murder.

Sure enough, Astor, Guggenheim, and Straus all died aboard the ship—and the Federal Reserve launched the next year.

Is there any truth to the J.P Morgan Titanic conspiracy theory?

It’s true that the three industrialists died in the sinking, while Morgan canceled his booking. But the timeline and facts don’t match up. Straus actually supported the Federal Reserve, while the others had no position on it.

The three living would have done nothing to stop the bank from being launched, as the Federal Reserve Act easily passed both houses of Congress in 1913, and the U.S. had already attempted a central banking system several times previously. Beyond that, sources of the time have Guggenheim booking his spot on the ship after Morgan canceled, meaning the conspiracy very nearly wouldn’t have worked in the first place.

There’s also no indication in the conspiracy theory of how Morgan would have ensured the ship sinks. Did he order the crew to hit an iceberg? Why would they take his orders, knowing they weren’t prepared for the catastrophe to come? What if the ship had survived?

The conspiracy often takes on other layers, such as a conglomerate of Rothschild family bankers and Jesuits actually ordering the ship’s captain to hit the iceberg—but again, this would have meant death for the captain, who would have gone down with the ship.

The theory briefly got a surge of recognition when the conspiracy avatar QAnon mentioned it in Nov. 2017.

Did a fire sink the Titanic?

An alternate theory as to why the ship so easily went down, when it had been designed to be unsinkable, is that the ship’s hull had been weakened by an uncontrolled coal fire.

In Jan. 2017, the Smithsonian Channel aired a documentary directed by Irish journalist Senan Molony, who had spent his career studying the Titanic.

Molony’s theory was that a long-standing fire in one of the ship’s coal bunkers had softened the hull of the ship to the point where it was easily torn apart by an iceberg.

In the documentary, Molony cites a recent photograph of the wreck showing a “30-foot-long black streak” near the site of the iceberg strike as a smoking gun that the fire had weakened the hull. The fire itself was already known about, and had likely been smoldering for days. But Molony contended that the fire was much worse than anyone knew about, and White Star hid its severity to protect their investment and ensure that the ship left England full of passengers, rather than cancel.

He also believes that the struggle to put the fire out made the crew use up more coal, and that the captain was racing to get to New York before the coal bunker exploded and destroyed the ship.

A new documentary suggests photos forgotten for a century prove the Titanic was weakened by a smoldering coal fire https://t.co/lsBbRVgSCo pic.twitter.com/c57lYxcsSP

Is the coal fire theory plausible?

The fire was real, but a number of the ship’s coal handlers survived the sinking and testified that the fire was out by the time the ship went down. Beyond that, the coal bunker that was burning was too far away from the section of the hull that was hit, nor was the fire powerful enough to substantially weaken the hull to the point of softening. And smoldering coal fires were fairly common on large ships of the time.

As for the black streak, there’s no indication as to what caused it—or any evidence it had anything to do with the sinking.

Are there other conspiracy theories?

There are a few others that are usually dismissed out of hand. One is that the ship was sunk by German U-boats operating illegally and in secret, though Great Britain and Germany wouldn’t go to war for over two more years, and there’s no evidence of torpedo strikes along the ship’s hull.

There are also rumors that a mummy’s curse led to the ship sinking, though mummy curses have no ability to sink ships and the ship wasn’t carrying any mummies. Yet another is that the ship’s hull number, 3909 04, can be read backwards in a mirror as “NO POPE,” portending the ship’s sinking at the hands of Catholic crew members. This also isn’t true, as that number has no attachment to the ship, and its actual designated number was 131,428; with 401 being its internal designation at its building yard.