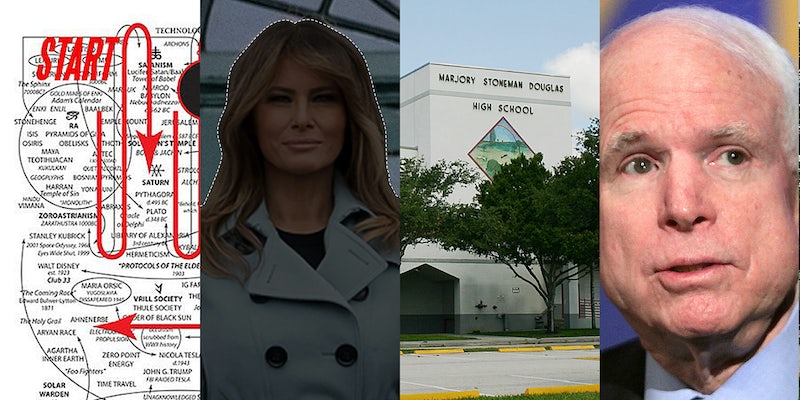 The worst, biggest, most inaccurate conspiracy theories of 2018

Some were nonsensical plots pushed by the president of the United States himself, while others were fetid accusations and plots that bubbled up in the very worst parts of the internet. A few were harmless fun, and a few others led to tragedy.

But they were all commanded attention.

No conspiracy theory epitomized the onslaught of nonsense that 2018 represented more than QAnon.

Today is the day #QAnon followers believe top Democrats will be arrested in mass and that the funeral of Bush is actually just to trap them and my god I can't wait for the inevitable mental gymnastics explaining why it never happened. But for now enjoy the hype. pic.twitter.com/F0PixWUXml

Though it began in October 2017, the conspiracy theory that an anonymous member of the Trump administration was dropping cryptic nuggets of intel about events to come took off in 2018—and seemed to worm its way into almost every event of the year.

The ever-expanding mythology of QAnon, where a massive wave of arrests of elites and Democrats is always just about to happen, was linked to everything from the missile defense false alarm in Hawaii in January to the death of former president George H.W. Bush in December. There were whole threads about fake assassination attempts against the president, whether Trump’s tweets contained secret messages, and celebrity sex trafficking rings.

And after months of flirting with mainstream conservative recognition, the movement broke out in August when a contingent of Q believers showed up at a Trump rally in Tampa, and got the entire mainstream media to wonder what the hell was wrong with these people.

A SWAT officer even managed to get a picture wearing a Q patch (which you can buy online) next to Vice President Pence— only for the VP’s account to quickly delete it.

That’s not to say it was all victories for Q and his believers. The movement was deplatformed from Reddit for violent threats, it saw multiple periods where QAnon stopped posting for weeks at a time, and endured a string of failed predictions. Even so, the faithful continued believing that “the storm” was just about to break, and the conspiracy theory shows no sign of disappearing.

At the end of May, a homeless encampment was found in an abandoned cement factory outside Tucson, Arizona. What would normally be, at best, a local interest story became a worldwide conspiracy theory thanks to the pedophilia panic stirred up by QAnon.

News outlets breathlessly ran with stories about an “underground bunker” possibly used for child sex trafficking, with a group of heavily-armed patriots acting as a freelance militia looking for children who they never managed to find.

Police quickly determined that the area was indeed only a homeless camp, but the patriot group continued webcasting from the factory, claiming they found mass graves, “rape trees,” and huge collections of children’s shoes.

Eventually, the founder of the patriot group was arrested, and both local and national authorities never found evidence of anything other than a group of homeless people squatting at the site.

The early reports were labeled as a cover-up when one student claimed she saw a second shooter, a claim that nobody was able to verify. The survivors were labeled crisis actors, paid by the government to pretend to be victims.

Unlike many other mass shootings, which are the subject of intense speculation for a few days only to fade away, the shooting stayed on the radar of conspiracy theorists for months afterwards.

NRA board members literally called the the @AMarch4OurLives founders, the survivors of a school shooting “Civil Terroists” and @TedNugent also an NRA board member, called for NRA members to “shoot us like dogs in the street”. @DLoesch https://t.co/9H4LFF6cnM

Much of this was due to the aforementioned visibility of the survivors, in particular, students David Hogg and Emma Gonzalez. Both were the subject of innumerable conspiracy theories well into 2018. In the case of Gonzalez, she became fodder for a viral meme of her supposedly ripping up a copy of the Constitution (in reality it was a paper target.)

Meanwhile, Hogg was hammered constantly for having a father who worked in the FBI, supposedly being on the payroll of George Soros, and having accidentally “revealed” that he  wasn’t at school the day of the shooting—thanks to an out-of-context video clip twisted around by conspiracy theorists.

The death of long-time U.S. Senator John McCain brought a flurry of bizarre accusations from QAnon believers, including that the anonymous conspiracy avatar had predicted McCain’s death exactly one month to the day it took place (they didn’t) and that McCain was executed by loyal patriots for treason.

Their “proof” consisted of some wishful thinking, interpreting maddeningly vague QAnon clues, and a slip of the tongue by Ohio governor John Kasich, who said on CNN that McCain had been “put to death” rather than “put to rest.”

In reality, McCain had been in ill health for months and had essentially retreated from the public eye for most of 2018.

A spate of high-profile celebrities took their own lives in 2018, including chef Anthony Bourdain and fashion designer Kate Spade.

Sure enough, each of these tragedies dragged with it a conspiracy theory that their suicide was actually a staged murder, likely linked to the non-existent pedophile rings at the heart of QAnon.

They were also shot through with misinformation, such as that they all hanged themselves on doorknobs with red scarves (part of a spate of “doorknob murders” in the last few years), or that they’d spoken out publicly against the cabal—only to be punished for it.

When First Lady Melania Trump underwent a routine kidney procedure, only to vanish from the public for three weeks, conspiracy theories were the natural result.

Actually, Melania, your disappearance is a legitimate news story. New from me https://t.co/ViekzMjb2X

Liberals on Twitter concocted theories ranging from her minor surgery being botched to Melania leaving the president and going into hiding, to her being hospitalized for injuries sustained during domestic violence.

The White House, intentionally or not, fanned the flames with mysterious tweets from the FLOTUS account that clearly weren’t written by her, to having the president himself attack the “Fake News Media” for being vicious to “our great First Lady.”

When California suffered through a rash of horrific forest fires, conspiracy theorists deduced that due to the patterns of the destruction they left behind, these fires couldn’t be natural, but instead, set by lasers fired from space.

The “directed energy weapon” theory posited that the powers that be used their fearsome weapons to destroy individual houses, not the trees outside the houses, many of which were left barely singed. These theories were fueled by social media and YouTube videos, and managed to create an entire parallel narrative out of the ravages of climate change.

This is NOT a FOREST FIRE. It is a direct assault via WEAPONIZED ENERGY LASERS. TIME TO call if what is it. CALIFORNIA ENERGY WEAPON FIRE/LASER FIRE #energyweaponsfire #californialaserfire @earthgardenlife @ddrwhip @realDonaldTrump pic.twitter.com/LUemG2UO5C

In reality, fires move at random, with embers going in the direction that the wind pushes them. Beyond that, trees don’t usually burn in wildfires due to their retaining water in their trunks—a feature houses don’t have.

The migrant caravan moving from Central America north to the U.S./Mexico border was the subject of relentless conspiracy theories from the far right.

Among the worst were that the caravan was actually full of ISIS members and hardcore gang members, that Israeli intelligence had infiltrated it, that it was planned by Democrats as a false flag to turn the public against Republicans before the midterms, and that financier George Soros was behind it.

While many conspiracy theories simply gin up social media outrage before fading away, caravan conspiracy theories had real and tragic results. The shooter in Pittsburgh’s Tree of Life synagogue cited supposed (non-existent) Jewish involvement in the caravan as the final straw before starting his killing spree.

In reality, the caravan disappeared from right-wing media and the president’s Twitter account just after the election, with many simply trying to get asylum in Mexico.

What will be the top conspiracy theories of 2019? There’s never really a way to tell what will take off, but if 2018 is any indication… they will be some new sort of horrific.