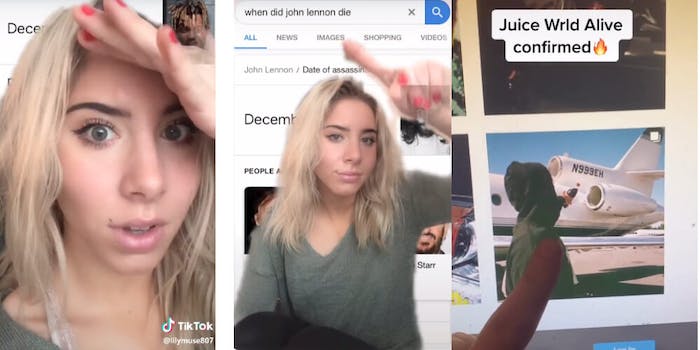 They are pointing to song lyrics and an old tweet about Juice WRLD faking his own death as proof.

Rapper Juice WRLD joined the group of rappers to die at an early age when he passed away after suffering from a seizure at an airport on Sunday. Just like with Tupac Shakur and Nipsey Hussle‘s deaths, conspiracy theorists are now alleging that Juice WRLD is very much alive.

But unlike most conspiracy theories, this one is circulating the not-so-dark corners of the web. Users on TikTok are pointing to cryptic song lyrics and an old tweet about Juice WRLD faking his own death as proof for their claims.

“My goal is to get overly famous, shine for a couple years..then fake my death,” Juice WRLD, whose real name is Jarad Anthony Higgins, tweeted in 2017, igniting the 2019 conspiracy.

My goal is to get overly famous, shine for a couple years..then fake my death ⚰

A Juice WRLD song is being used to fuel the conspiracies as well. In the song “Legends,” Juice WRLD supposedly predicts his age of death.

Another TikTok user claims Juice WRLD’s private plane never landed in Chicago. And another alleges they found out from a phone call that Juice WRLD was never admitted to the hospital he was reportedly sent to.

One fan says in a video that the conspiracies are giving him hope.