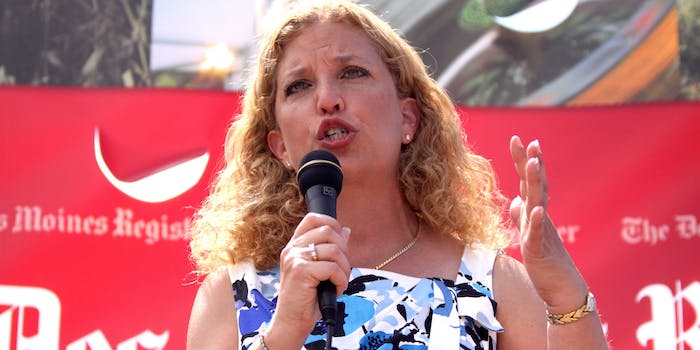 Tim Canova almost lost before he ever had a chance.

However, when Canova requested access to the Democrat’s centralize voter file—a database he says is essential to mounting a successful campaign—the Florida Democratic Party told him that it only granted access to incumbents.

That all changed last week, when state party officials gave in to a national public outcry and granted Canova access to the so-called NGP VAN, the Democrat’s massive database of records on over 100 million Americans.

“It’s quite clear to anybody who has run elections or studied the process that the VAN voter database and software is very key to this.”

While there are a number of other voter data management options available to candidates, Canova felt that the party’s centralized voter file, which contains information gathered by every campaign that uses it, is superior because it is, in effect, the collected wisdom of over a decade of electoral legwork from hundreds if not thousands of Democratic campaigns.

“We’re spinning our wheels to find an alternative, although none of the alternatives are ideal,” Canova said in an interview before he had access to the VAN. “They’re all second-best solutions, you can say. It is hampering us, you can’t deny it.”

A Florida Democratic Party spokesperson told New Times Broward-Palm Beach that the state party has maintained a policy of denying access to primary challengers of the state’s Democratic congressional delegation since 2010 explicitly as a way of protecting incumbents. “We stand with our incumbent members of Congress, and we’re proud of the job they do representing the people of Florida,” the spokesperson said.

After being denied access to the database, Canova posted an open letter to the blogging platform Medium, slamming the decision and alleging collusion between Waserman Schultz and state party leadership.

“The more the establishment tries to rig the system,” Canova wrote, “the more people are realizing the importance and the urgency of our campaign to unseat Debbie Wasserman Schultz.”

Canova added in a subsequent interview that he was considering legal action against the party before it granted his campaign access to the NPG VAN. Neither Wasserman Schultz’s campaign office nor the Florida Democratic Party responded to a request for comment.

Canova’s Medium post went viral—likely both due to the anti-establishment mood currently roiling the electorate, as well as a recent set of scandals that have swirled around Wasserman Schultz. While the genesis of Canova’s campaign was rooted in his frustration at the congresswoman’s support for the Trans-Pacific Partnership trade deal, Wasserman Schultz has also been widely criticized for what is seen as the DNC’s bias favoring former Secretary of State Hillary Clinton‘s presidential ambitions over those of Sen. Bernie Sanders (I-Vt.).

The longest-running complaint is that the DNC scheduled a significant number of Democratic primary debates on weekend evenings, when the low viewership would likely make it harder for Sanders, who faces a gap in name recognition, to raise his public profile against Clinton.

Wasserman Schultz has also been slammed by progressives for briefly cutting off access to the very same voter database initially denied to Canova after a technical glitch allowed Sanders staffers to access proprietary information belonging to the Clinton campaign. Even though the Sanders campaign quickly informed the DNC about the problem, a handful of searches were conducted that, if the accessed information was kept by Sanders, would have given his electoral effort a significant advantage over Clinton—namely, a list of weak Clinton supporter that the data said could be convinced to vote for Sanders under the right set of circumstances.

The issue was resolved in a few days, after Sanders threatened a lawsuit; however, campaign manager Tad Devine insisted to Bloomberg Politics that losing access to the data was “grinding our campaign to a halt” and was effectively costing the campaign the equivalent of $600,000 every day they couldn’t use it.

While Wasserman Schultz has insisted there is no “shred of evidence” her actions are biased toward Clinton, a pair of online petitions calling for her to resign as DNC chair over this perceived slant have generated over 117,000 signatures.

The Florida Democratic Party granting Canova access to the voter file is unique and does not guarantee access to any other challengers within the party. Canova was given access “to avoid any appearances of favoritism,” Florida Democratic Party Executive Director Scott Arceneaux told the Miami Herald. “This is a truly unique set of circumstances where we have an incumbent member of our delegation who’s also our DNC chair.”

Canova was pleased by the development, but he charged that the ability of state parties to withhold access to the voter database is troubling. “I believe it is unfair, undemocratic, and a big mistake for the party to continue denying access to this important campaign tool to other Democratic candidates challenging Democratic incumbents,” he said. “This policy serves to entrench incumbents while impeding the democratic process. Democratic Party voters should be the ones who decide the outcomes of primaries, and state parties should not be putting their fingers on the scale to help one candidate over another.”

The NGP VAN system has its origins with the tenure of former DNC Chair Howard Dean in the mid-2000s. Dean—a former Vermont governor who had previously run an insurgent, albeit unsuccessful, campaign for the 2004 Democratic presidential nomination—is widely credited as the first to really take advantage of online organizing. Dean launched what he labeled a “50-state strategy” of building out the party’s technical infrastructure that included a unified database of Democratic voters, and he hired NGP VAN—hence, the file’s name—to build it.

“We stand with our incumbent members of Congress, and we’re proud of the job they do representing the people of Florida.”

Representatives from NGP VAN did not respond to a request for comment.

When Barack Obama won the presidency in 2008, much of his success was credited to his campaign doing the best job of collecting and analyzing massive amount of voter data through a custom system developed by a team of engineers who had previously spent time at leading tech firms like Twitter, Google, and Facebook. The Obama team saw how integral that data was in the culmination of their own electoral fortunes and wanted to share the wealth. Democrats around the country could use the data they’d gathered on the condition those campaigns add their own information back into the database after the races concluded.

When all that information is combined with data from commercially available sources, it gives campaigns unprecedented insight into not only how likely individuals are to for a specific candidate, but how likely they are to be susceptible to persuasion to another candidate.

“With NGP VAN’s information, the Democratic Party can also learn about someone’s educational history and, often, his or her ethnic background,” journalist Léo Mouren explained for AFP. “A 30-year-old woman living in a major city and subscribed to a literary magazine, for example, has more chances of voting for Clinton than a 60-year-old man living in a southern rural area and subscribed to a magazine for weapons enthusiasts.”

The dataset itself is owned by the national party, but it’s the individual state parties that control who gets access. The Texas Democratic Party, for example told the Daily Dot in an email that the VAN is “our most powerful tool,” and a spokesperson said that it does not restrict access to incumbents. However, challengers to Democratic incumbents in Missouri and New Jersey have reported having their requests rejected.

Democrats in California use a different system. Instead of NGP VAN, the Golden State Democratic Party gets its voter data from a local firm called Political Data Inc. That information is made freely available to volunteers working on “get out the vote” efforts, but any candidate is able to purchase the file at his or her own expense. A California party official said they prefer PDI’s info because it tends to be more timely. However, candidates are also able to purchase data directly from NGP VAN, if they so desire, without the state party in any way inserting itself into the process.

Republicans, on the other hand, don’t have a centralized database and instead use a constellation of other solutions, such as NationBuilder. NationBuilder founder Jim Gilliam told the Daily Dot that his company’s products are popular with many Democrats, especially in local races that don’t attract the same level of attention from the national party, and can replicate much of the same functionality as NGP VAN by drawing from a litany of publicity available and privately acquired datasets. Whatever information a campaign inputs into NationBuilder belongs to that campaign—side-stepping thorny questions about data ownership that inevitably arise with NGP VAN.

The system for granting access to NGP VAN is, at best, inconsistent, and there are arguments to be made on both sides of the national party opening it up to everyone who runs with a “D” next to their name.

On one hand, a powerful, entrenched incumbent like Wasserman Schultz, simply by virtue of her experience, connections, and knowledge of how Congress works, is a valuable asset to the party compared to a newly-elected freshman lawmaker. As such, the party has an incentive not to freely give away tools that undoubtedly make unseating her considerably less difficult. On the other hand, at a time when the overwhelming majority of congressional seats are in no danger of shifting from one side of the aisle to the other due to gerrymandering and the natural sorting of demographic populations, primaries represent a rare avenues to get fresh ideas into Congress.

“If there’s no challenge in the primary,” said Canova, “there’s no real democracy.