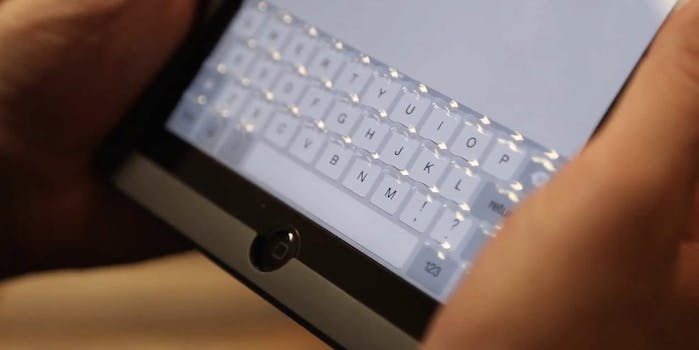 This magic touchscreen keyboard might change how you type

No matter how good you are at typing on your iPad‘s own touchscreen, there’s no getting around the fact that you’re uncomfortably smacking your fingertips against glass to generate characters. A product called Tactus Phorm turns this notion on its head by giving you a raised surface on your touch-sensitive screen that more closely resembles the feel of a proper keyboard.

Here’s what it looks like when you flip it into writing mode:

Beam me up, Qwerty.

The Phorm (which works for iPad Mini) functions as a screen protector that lets you flip a switch in back in order to bring up this impromptu keyboard for the sake of usability. If you happen to start an app that launches the keyboard on its own, the Phorm will automatically swing into action for you as well.

I’ve tried similar products in the past, and having a raised surface over a tablet’s keyboard certainly makes a big difference in one’s typing efficacy. By flipping the switch or launching a keyboard-enabled app, the Phorm’s screen protector fills with fluid in exactly the right places to give you “buttons” to type with.

This little gadget is currently available for preorder at a $50 discount, but the $150 full price is likely to scare you away unless you’re already a true believer.