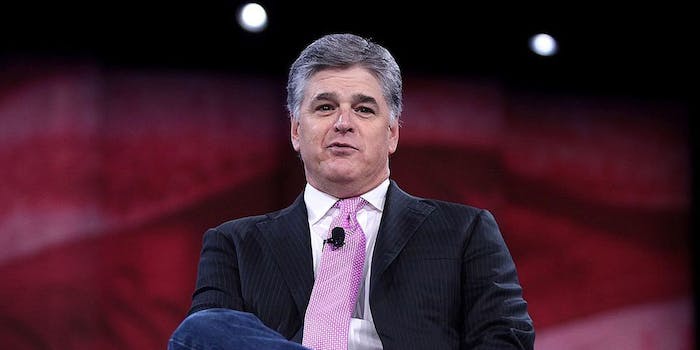 Areas of the U.S. that watch more 'Hannity' saw higher numbers of infections and deaths.

A new study suggests that coverage of the coronavirus from Fox News host Sean Hannity helped the deadly pathogen spread across the country.

Released by a group of economists from the Becker Friedman Institute for Economics at the University of Chicago on Sunday, the study, titled “Misinformation During a Pandemic,” focused in on content coming from Fox News from the beginning of the outbreak up through March.

Specifically, the study compares coverage from Hannity, who repeatedly downplayed the virus, to that of fellow Fox News host Tucker Carlson, who warned that COVID-19 was a legitimate threat early on.

The paper’s findings are based on numerous datasets including a poll of Fox News viewers over the age of 55 and both host’s ratings throughout different parts of the country.

The researchers concluded that Hannity viewers were not only less likely to adhere to social distancing guidelines but that areas in which they lived experienced more infections and deaths from the virus.

“Both anchors first discussed the coronavirus in late January when the first US case was reported, but Carlson continued to discuss the subject extensively throughout February while Hannity did not again mention it on his show until the end of the month,” the paper states. “While Hannity discussed the coronavirus as frequently as Carlson during early March, he downplayed its seriousness and accused Democrats of using it as a partisan tool to undermine the administration.”

It was until the middle of March when President Donald Trump finally declared a state of emergency that Hannity’s coverage began to shift.

The researchers ran numerous models to work out as many variables as possible and still came to a stark conclusion: “Greater exposure to Hannity relative to Tucker Carlson Tonight leads to a greater number of COVID-19 cases and deaths.”

The study even found that Carlson’s viewers began washing their hands more and social distancing days sooner than those who watched other shows on Fox News.

Hannity’s viewers, on the other hand, were slower to change than others.

While expansive, the study has not been peer-reviewed or accepted for publication at a journal. As noted by Vox, however, experts who have analyzed the paper say the findings appear legitimate.

“It’s a good paper; they took pains to control for many alternative explanations,” said Zeynep Tufecki, a professor at the University of North Carolina. “This really looks like a causal effect of misinformation [leading] to deaths.”