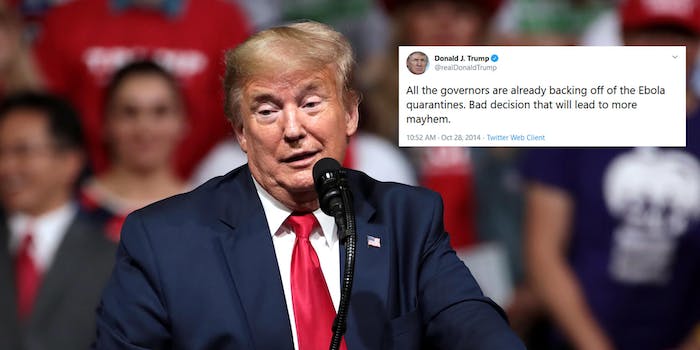 Trump in 2014: Governors making a ‘bad decision’ to end quarantines

In the past, he’s called the Electoral College a “disaster for democracy,” and criticized former President Barack Obama for golfing, among numerous other tweets that can be seen as criticizing exactly what he has done as president.

The latest one to be discovered revolves around his handling of the coronavirus lockdowns in states across the country.

The president seems to want to end the lockdowns—encouraging people to “liberate” states. But he was singing a different tune in 2014 during an Ebola scare.

In 2014, several states said any healthcare workers who returned from treating people with Ebola in Africa had to remain in quarantine.

Trump, then a reality-TV star, seemed to think the quarantines were a good thing.

“All the governors are already backing off of the Ebola quarantines. Bad decision that will lead to more mayhem,” the now-president wrote in October 2014.

There are a lot of Ebola tweets from Trump that contrast his handling of the coronavirus emergency.

Last week, the White House released a plan to reopen the United States amid the outbreak. As NPR notes, governors had mixed feelings about it.

Given the president’s push to end the self-quarantining and closure of non-essential businesses, many people couldn’t help but notice his different feelings in 2014.

It’s worth noting that coronavirus has killed at least 41,000 Americans. The Ebola outbreak Trump tweeted about killed two Americans, according to the CDC.