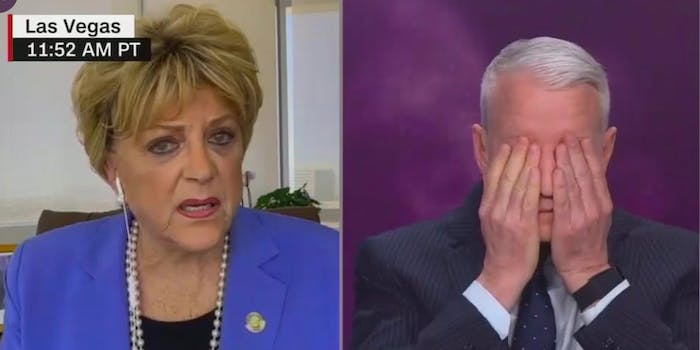 The 15-minute long discussion was filled with countless jaw-dropping remarks.

An interview between CNN’s Anderson Cooper and Las Vegas mayor Carolyn Goodman is going viral over the politician’s insistence that casinos and hotels reopen amid the ongoing coronavirus pandemic.

When pressed on how casinos could operate safely without further spreading the highly-contagious virus, Goodman stated that it would be the job of businesses to figure it out.

Goodman went on falsely suggest that COVID-19 is just like any other viral pathogen, stating that “we’ve had viruses for years.”

But that wasn’t all. Goodman even went as far as to stand behind a previous remark in which she advocated for allowing the free market to decide which businesses stay open based on how many people get sick in their establishments.

Goodman also accused Cooper of being an “alarmist” for arguing that allowing thousands of people into a casino would likely result in the disease spreading even further.

At one point during the talk, Cooper removed his glasses and rubbed his eyes in what may have been a moment of disbelief.

When shown by Cooper a graphic from Chinese researchers of how easily an asymptomatic person can spread the coronavirus in a restaurant, Goodman responded by stating that “this isn’t China, this is Las Vegas, Nevada.”

If that wasn’t enough, Goodman then admitted that she had offered up Las Vegas to be a “control group” to see how many people would actually die without social distancing.

“Perhaps surprisingly, enlisting a large group of people in a lethal experiment without asking for consent and without oversight by an ethics committee is, in fact, frowned upon in most scientific circles,” one Twitter user noted.

The back-and-forth caught the attention of everyone from comedian Jimmy Kimmel to Rep. Ted Lieu (D-Calif.).

“Las Vegas Mayor Goodman has the right to hold crazy opinions,” Lieu tweeted. “However, the first duty of government is to protect the lives of its citizens. Any elected official who doesn’t understand that duty needs to resign.”

The interview also led the term “Las Vegas” to become one of the top trends on Twitter.

As extreme, misguided, and scientifically inaccurate Goodman’s remarks are, her views are becoming increasingly popular among fringe right-wing groups. Those beliefs have led some Americans to take to the streets to protest social distancing efforts across the country.

The vast majority of Americans, according to a new poll from the Associated Press, agree with the stay-at-home measures currently in place.