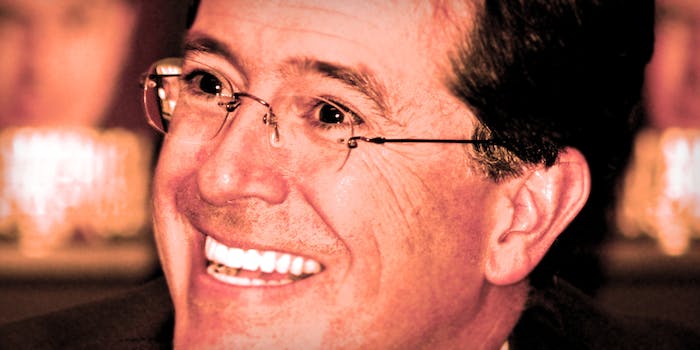 Will Stephen Colbert cancel his speech at a company that helped the NSA?

Colbert is speaking at RSA, the company accused of giving its security keys to the NSA.

There’s more pressure on celebrities to be mindful of their associations than there used to be. In part, this is due to the fact that the Internet has taken to social activism in a big way and the public is more knowledgeable about the daily lives of public figures than ever before. Even comedians, it seems, have trouble avoiding scrutiny when they choose to hobnob with figures of controversy.

Stephen Colbert, who is normally quite popular amongst radicals and reformers alike, is taking some heat over a conference he plans to attend in San Francisco next month. The host of this event is the security firm RSA, recently accused of accepting millions from the National Security Agency in exchange for weakening its encryption software. A flawed formula was introduced into RSA’s products, allowing the NSA to bypass security features consumers relied upon.

Top secret documents leaked by NSA whistleblower Edward Snowden revealed a back door into RSA’s Bsafe software in September, however the company denied any knowledge about the flaw in their systems. This was particularly puzzling as the flimsy encryption used by Bsafe had previously been revealed by security expert Bruce Schneier more than six years ago. Schneier’s accusation was pretty hard to miss, as it was plainly titled, “Did NSA put a backdoor in new encryption standard?”

In December, a fresh batch of leaked NSA documents revealed that not only had RSA continued implementing the flawed security protocols into their products, but that they received $10 million from the NSA to do so. There were many revelations about the NSA’s secret activities in 2013, but by far, corporate monkeywrenching was the hardest to explain away. Naturally, the idea that the U.S. government was funneling tax dollars into a project that was crippling security software used by American citizens was controversial, to say the least.

Both the NSA and RSA’s parent corporation EMC declined to respond as the media pressed them for answers. RSA, themselves, later categorically denied accepting the funds and claimed their close relationship with the NSA had always been a well-known fact.

Some current and former members of RSA spoke anonymously to journalists, claiming the company was misled by government officials and that they were unaware the NSA was able to break the encryption. But, again, the integrity of the algorithms in use by RSA, specifically to generate Bsafe’s encryption passkeys, have been called into question by security experts as far back as 2007.

So far, eight security and privacy experts have refused to attend the conference organized by RSA, including Alex Fowler, global chief of privacy for Mozilla. Colbert however, has yet to pull his invitation. An online rights group, Fight For The Future (FFTF), has started a petition which calls for the Comedy Central star to cancel his appearance.

“We were inspired when some of the worlds’ most brilliant security experts started pulling out of the RSA conference left and right,” Evan Greer, FFTF’s online campaign managers, told the Daily Dot. “It seemed like a really concrete way for the tech community to draw a line in the sand and make it clear to all companies that taking bribes and colluding with government surveillance is unacceptable and won’t be tolerated.”

Greer explained that when FFTF learned Colbert was scheduled to give the keynote address, launching their petition was obvious. If he pulled out, she said, more attention will be drawn to the NSA’s corporate sabotage.

“Infiltrating security research and undermining widely used encryption standards is clearly one of the most nefarious—and dangerous—things that the NSA has done, and Colbert is the perfect person to bring mainstream attention to the issue by taking a stand and joining nearly a dozen other speakers in boycotting the conference.”

FFTF’s petition has already gained some traction with the press. Both the Guardian and the Boston Globe have published about Colbert’s plans to attend the event, as well as FFTF’s attempt to change his mind.

Although, not everyone agrees with FFTF’s plan, Greer explained. Some are willing to give Colbert the benefit of the doubt. Given his history behind the mic, it’s possible he would take the opportunity to open up on RSA for colluding with the U.S. government against American citizens.

Greer recalled the 2006 White House Press Correspondents Dinner, where Colbert famously grilled George W. Bush over his 32 percent approval rating and the Iraq War. At one point, Colbert told the crowd, “By the way, before I get started, if anybody needs anything else at their tables, just speak slowly and clearly into your table numbers. Someone from the NSA will be right over with a cocktail.”

However, Greer isn’t convinced. “While that would certainly be a lot of fun to watch, he would have a much greater impact by canceling,” she said.  “He can do much more good by just not showing up. If he pulls out, many others will follow, and it will hit RSA where it hurts: in their NSA lined pockets.”